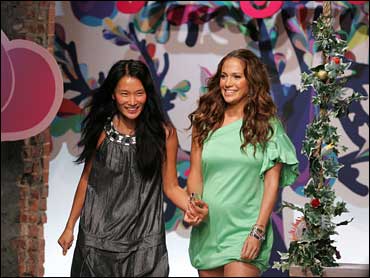 Singer-actress Jennifer Lopez took her clothing line to another level during Fashion Week -- she took it to fairyland.

Big colorful butterflies hanging from the ceiling. Pink, purple and green trees. A model dressed as a fairy, on a swing.

Jennifer Lopez said her new young contemporary line was "fantasy -- classic inspiration but with a new, kind of funky spin," so she turned the setting of her JustSweet show Tuesday night at New York Fashion Week into a fairy tale.

Her outfits alternated between sophisticated (lots of minidresses) and casual (a pair of skinnies with a cargo green graphic T-shirt). She incorporated her signature one-shoulder look, but didn't go overboard, along with bell sleeves and cropped jackets to add chic to all that trendiness.

Lopez, 37, said she developed JustSweet to fill the void between J.Lo, her denim and T-shirt urban wear line, and Sweetface, a high-fashion, higher-priced line. She wanted to do something in the middle. All the pieces range from $49 to $99. She said she designed the line for the young at heart.

The actress-singer, who performed at Fashion Rocks on Thursday, said she's not worried about whether she is taken seriously as a designer.

"I'm not looking for the credibility," she said. "I'm looking to make clothes that every woman can wear."