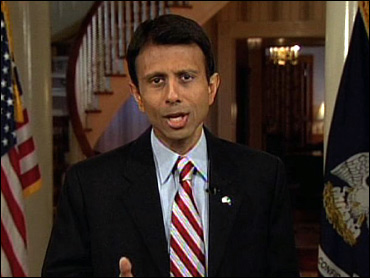 (AP)
Louisiana Governor Bobby Jindal yesterday addressed criticism of the widely-panned speech he gave one week ago responding to the President Obama's address to a joint session of Congress.

"Look, I get that people thought I could have spoken better. I get that," Jindal told reporters in Baton Rouge, according to the Associated Press. "That's fine ... What's important to me is the content. I'm a policy guy. You guys know that. I've always been a policy guy, always will be a policy guy. The ideas are important. The substance is important."

Though Jindal was widely criticized on his delivery, he also took heat from both Democrats and Republicans for the content of his speech, which some deemed a rehash of tired GOP ideas. New York Times center-right columnist David Brooks called Jindal's rhetoric "a form of nihilism" and deemed the speech "a disaster for the party."

(CBS)
The governor, who was profiled on "60 Minutes" Sunday, also spoke to Larry King last night.

"I'm certainly not nearly as good of a speaker as [President Obama] is," Jindal said. "And I'm not the only one that's got that opinion."

Jindal again stressed that the content of his speech, not the delivery, was paramount – though he did complain that "for years, I've been told I speak too quickly. Now I'm told I speak too slowly."

As he did in his speech, Jindal criticized spending in the Obama-backed stimulus package, saying, "I don't think $30 million for the federal government to buy new cars, $1 billion for the Census, $50 million for the National Endowment for the Arts is going to get the economy moving again as quickly as allowing the private sector to create jobs."

He did not address allegations that he told an inaccurate story during the speech about an interaction with a Jefferson Parish sheriff during Hurricane Katrina.

In speaking to reporters in Louisiana, Jindal joked about the comparisons he drew following the address, referencing his state's history of corrupt politicians.

"Being compared to Mister Rogers is better than some of the other comparisons we've had here in the past," Jindal said.

(AP Photo/Danny Johnston)
Some commentators have compared Jindal's situation to that of Bill Clinton, who was a rising star in 1988 when he gave a speech at the Democratic convention that went on too long and was widely considered a flop. (It's not a good sign when people cheer when you utter the words "in conclusion.")

Realizing his high-profile address bombed, Clinton decided to get in on the joke – and soon after went on the "Tonight Show" to laugh with Johnny Carson about how badly his big moment had gone.

"Clinton very quickly figured out that if everyone was laughing at him, the only way to come out ahead was to join in and ultimately lead the hilarity," notes James Fallows.

Jindal isn't exactly following the Clinton script – he has opted for more serious venues, for one – but he is engaged in a similar type of damage control.

The Louisiana governor "is trying to minimize the losses and replace them with a positive image with voters," Emory University political science professor Merle Black told CNN.

Fallows argues that Jindal would be more effective in doing so if he went more aggressively for laughs.

"Turning the situation in his favor would be an act of Clintonlike dexterity, and would ideally happen under the auspices of today's Johnny Carson, Jon Stewart," he writes. "…Gov. Bobby, follow the trail that Gov. Bill has blazed! And act soon. Self-deprecation delayed is self-deprecation that just makes things worse."