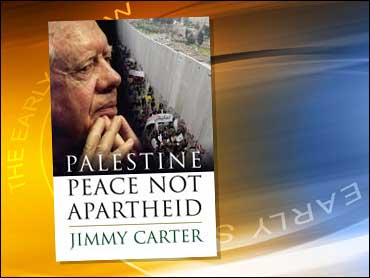 This column was written by Mona Charen


Having scolded the Western world for its "inordinate fear of communism," Jimmy Carter is now, 30 years later, attempting to legitimize the shameful Zionism Equals Racism resolution passed and later repealed by the United Nations. The man has a seemingly unerring instinct for error. Palestine: Peace Not Apartheid is touted (by Carter himself) as an evenhanded analysis of the Israeli/Arab conflict — but one need go no further than the title to suspect otherwise.

Carter, like all Israel bashers, proclaims his courage. Please. It takes courage to criticize Israel? The world is teeming with Israel-haters. No other nation in the world — not Russia, not Saudi Arabia, not Cuba — is the subject of so much concentrated calumny. In Europe, as Melanie Phillips recounts in her dazzling book Londonistan, Israel is cursed not just among the rabble but at elegant dinner parties and embassy soirees. And while it's true that in the United States Israel enjoys high levels of support, it is also routinely castigated (and nearly always by people who imagine they are defying some powerful cabal). What is amazing is that even a former president of the United States confuses freedom of speech with freedom from criticism for the content of that speech.

Here's a precis of the book: Israel is the problem. In fact, it's all summed up in the final paragraph: "Peace will come to Israel and the Middle East only when the Israeli government is willing to comply with international law, with the Roadmap for Peace, with official American policy, with the wishes of a majority of its own citizens — and honor its own previous commitments — by accepting its legal borders." By the way, that kind of awkward phrasing is found throughout this slapdash work.

Sixty years of withheld recognition by its neighbors, ceaseless terror against Israeli civilians, countless agreements defaulted upon — none of this disturbs President Carter's certitudes.

The book is so foolish that you can pretty much close your eyes and point to any page to find something simplistic, naïve, or tendentious. On page 97, for example, Carter asserts that "The militant group Hezbollah ... was formed in Lebanon in 1982 to resist the Israeli occupation." Not quite. Hezbollah's founding document calls for Islamic rule in Lebanon, an end to Western imperialism and the destruction of the state of Israel. An arm of the Iranian Islamic revolution, Hezbollah's operatives have been found in France, Spain, Cyprus, Singapore, the "triborder" region of South America and the Philippines, reports Foreign Affairs magazine.

Carter tells the history of the Six-Day War in 1967 this way: "On June 5, Israel launched preemptive strikes, moving first against Egypt and Syria, then against Jordan." That's false. Israel did strike first at Egypt and Syria (waiting to be attacked would have meant national suicide), but specifically called upon Jordan to stay out of the fighting. Jordan's King Hussein, putting faith in Gamal Abdel Nasser's claim that Egypt was defeating Israel, chose to shell Jerusalem. Israel then turned its full might on Jordan, driving them out of Jerusalem and the West Bank.

Explicating last summer's Israel/Hezbollah war, Mr. Carter offers a distorted history. He claims that Hezbollah "attacked two Israeli vehicles, killing three soldiers and capturing two others." Hezbollah did this, Carter explains, in order to exchange them for captives in Israel. Very understandable. But then Israel just went wild, attacking Lebanon without mercy. In fact, Hezbollah's attack on the Israel Defense Forces was accompanied by rocket attacks on several Israeli towns, which wounded several civilians and displaced many others. It was also timed to hit Israel when she was already under attack by Hamas from Gaza.

These are not careless errors, they flow from Carter's pointed animus toward Israel and corresponding softness toward the Arabs (read his elegy to Saudi Arabia if you want to gag). How else to account for the fact that he takes Yasser Arafat's peaceful declarations at face value? Or that he lets slip nasty anti-Semitic asides like this: "It was especially interesting to visit with some of the few surviving Samaritans, who complained to us that their holy sites and culture were not being respected by Israeli authorities — the same complaint heard by Jesus and his disciples almost two thousand years earlier." Those Jews never change, do they? What complaints exactly did Jesus receive about holy sites and culture? We could ask President Carter, but we should know better than to expect an honest answer.
By Mona Charen
Reprinted with permission from National Review Online