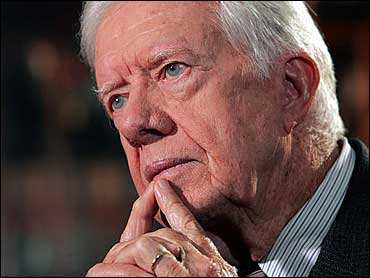 Former President Carter said Saturday the detention of terror suspects at the Guantanamo Bay Naval base was an embarrassment and had given extremists an excuse to attack the United States.

Mr. Carter also criticized the U.S.-led war in Iraq as "unnecessary and unjust."

"I think what's going on in Guantanamo Bay and other places is a disgrace to the U.S.A.," he told a news conference at the Baptist World Alliance's centenary conference in Birmingham, England. "I wouldn't say it's the cause of terrorism, but it has given impetus and excuses to potential terrorists to lash out at our country and justify their despicable acts."

The former president said, however, that terrorist acts could not be justified, and that while Guantanamo "may be an aggravating factor ... it's not the basis of terrorism."

Critics of President Bush's administration have long accused the U.S. government of unjustly detaining terror suspects at the Guantanamo Bay Naval Base on the southeastern tip of Cuba. Hundreds of men have been held indefinitely at the prison, without charge or access to lawyers.

"What has happened at Guantanamo Bay ... does not represent the will of the American people," Mr. Carter said Saturday. "I'm embarrassed about it, I think it's wrong. I think it does give terrorists an unwarranted excuse to use the despicable means to hurt innocent people."

Earlier this month, Mr. Carter called for the Guantanamo prison to be shut down, saying reports of abuses there were an embarrassment to the United States. He also said that the United States needs to make sure no detainees are held incommunicado and that all are told the charges against them.

Mr. Carter, who won the 2002 Nobel Peace Prize, has been an outspoken critic of the Iraq war.

"I thought then, and I think now, that the invasion of Iraq was unnecessary and unjust. And I think the premises on which it was launched were false," he said Saturday.

The Baptist World Alliance, comprising more than 200 Baptist unions around the world, was formed in London in 1905. The headquarters of the alliance, which meets in a different location every five years, moved to the United States in 1947.

An estimated 12,700 delegates gathered in the city of Birmingham in central England for the conference. Mr. Carter, a Sunday school teacher in his hometown of Plains, Ga., was to lead a Bible study lesson during the conference.

He praised British police and intelligence services for the swift arrests in connection with the July 21 failed bombing attempts on London's transit system.

"I'm very proud to be in a nation that stands so stalwart against terrorism with us," he said. "The people of my country have united our hearts and sympathy for the tragedy that you have suffered from terrorism."