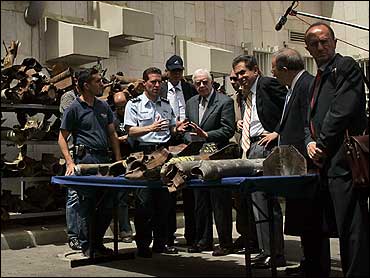 Former U.S. President Jimmy Carter deplored Palestinian militants' attacks on Israel as a "despicable crime" as he toured a rocket-battered town on Monday.

Carter met with police officials and with the mayor of Sderot, a southern town just 1 mile from the Gaza Strip border. He was shown a house badly damaged by a rocket strike and piles of rusting projectiles collected after hitting the town.

"I think it's a despicable crime for any deliberate effort to be made to kill innocent civilians, and my hope is there will be a cease-fire soon," Carter told reporters.

Carter brokered Israel's historic peace accord with Egypt in 1979, the first treaty it signed with an Arab country. But he has been unpopular in Israel since publishing a book two years ago drawing comparisons between Israeli policies in the West Bank and Gaza and apartheid in South Africa.

He further angered Israelis with his plans to hold talks in Syria this week with the leader of Hamas, the Islamic group that rules Gaza and is largely responsible for the rocket fire. Hamas has killed some 250 Israelis in suicide bombings and has been blacklisted by the U.S. and Israel as a terrorist organization.

Sderot mayor Eli Moyal said he met with Carter to present Israel's side, even though he said he was "upset" about Carter's scheduled meeting with the Hamas leader, Khaled Mashaal.

"I don't think he should meet with killers," Moyal said.

Sderot residents seemed unmoved by Carter's appearance in their town. He left Sderot with a gilded rocket fragment presented to him by town officials.

Later, stopping at Barzilai Medical Center in nearby Ashkelon, doctors detailed the injuries and post-traumatic stress caused by the Palestinian rocket attacks, which have killed 13 people over the past seven years. Carter visited privately with three Gaza children who Israel has allowed in for treatment at the hospital, two of them suffering from congenital diseases and the third hurt in a traffic accident.

Carter has been snubbed so far by Israel's senior leadership, including Prime Minister Ehud Olmert. He met Sunday with Israel's ceremonial president, Shimon Peres, who told him that meeting Mashaal was "a very big mistake," according to Peres spokeswoman Ayelet Frisch.

Speaking at an event organized by an Israeli financial newspaper, Carter criticized the U.S. administration's policy of not talking to countries like Iran, saying it was counterproductive. He said he hoped to become a "communicator" between Hamas and U.S. leaders.

they have so far refused," he said.

In an interview with the Israeli daily Haaretz published Monday, Carter said he intended to use the Mashaal meeting to press for the return of three Israeli soldiers captured by Hamas and the Lebanese Hezbollah militia. He said he would also try to get Hamas to accept a pan-Arab plan for peace with Israel.

"The most important single foreign policy goal in my life has been to bring peace to Israel, and peace and justice to Israel's neighbors. I have done everything I could in office and since I left office to do that," the paper quoted Carter as saying.