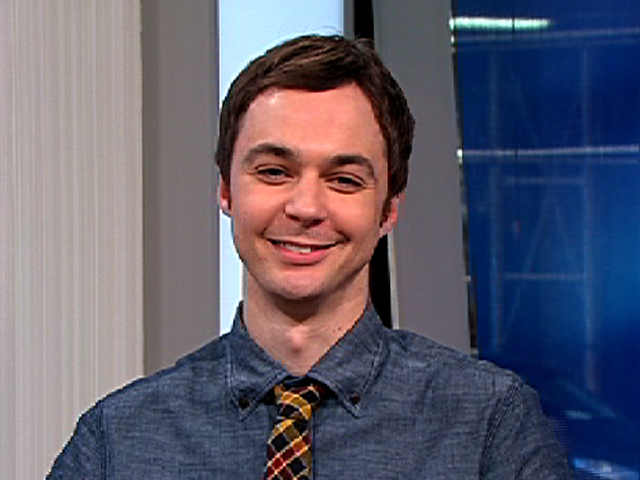 The actor best known for his role on the hit CBS sitcom "The Big Bang Theory" says he's definitely not as smart as the beloved character he plays.

As for the show's success, Parsons said the show seems to have reached many different people.

He said, "It's been a fantastic four years. We've gotten better and better, and literally the word on the street, you run into people all the time that are watching it, and they vary in age, gender, size. Just all sorts of people that are watching it, and I really appreciative that 'A,' we get to keep doing it and 'B' that it is appealing to so many different types of people. I hesitate to call it family entertainment. But I think that's exactly kind of what we've done."

Parsons himself has also received a steady stream of recognition for his portrayal of the chic geek.

He most recently won an Emmy and a Golden Globe for leading comedy man chops.

When he won the Emmy, Parsons said he didn't believe it was happening.

He explained, "I really felt that way as I walked up the steps. It was LL Cool J and Eva Longoria ... up there and that seemed just about weird enough. And I don't know. It was wonderful. It was wonderful. But it was very odd. They had a dream quality to it."

When Parsons won the Golden Globe a couple of months later, Wragge asked if he felt bad for the other cast members on the show.

"No. I don't feel bad for the rest of the cast members." Parsons joked, "Are you kidding me? They're doing fine."

Wragge noted "The Big Bang Theory" now has the possibility of taking a coveted time slot that belongs to "Two and a Half Men."

Parsons said he doesn't have "any idea" what's happening with the show that formerly starred Charlie Sheen.

However, he said, "As far as moving times, we've moved four different time slots in four years, and thanks to the good thinking of the time makers at CBS, it's always worked out for us. So if we do move again I trust, knock on wood, that it will be another good move. I loved being on Mondays. Things have worked out great on Thursdays, though. So, I just -- I don't have a feeling on it."

He added, "I worry. I did worry until the fourth time they moved us and the people still came. Not to take it for granted, but apparently they know what they're doing over there. Somebody in this building has their eye on it."

Aside from "The Big Bang Theory" Parsons has taken on a new role on Broadway. In his hiatus from the show, he is taking a vacation - to act.

The star has turned to Broadway for a role in "The Normal Heart." Parsons plays a young gay Southern transplant named Tommy Boatwright. The play is being performed at the John Golden Theatre in New York. Parsons co-stars include Ellen Barkin, Joe Mantello, John Benjamin Hickey and Lee Pace.

Parsons said acting on Broadway is "a slice of heaven."

"There's something about this play, this particular production, and the effect it's having on audiences that, in many ways, is for me exactly why I got into acting to begin with. It is a true ensemble effort. There's just a group dynamic and a group power behind this piece, and it really seems to translate to the audience," he said.

Parsons continued, "You know, every night we wrap this play up, and I feel very affected by it. It's all true. You know, it's all fact-based. And I think that has a big impact. And it's -- there's no denying it's sad. It's moving. You know. But there are movements of levity. Hopefully i get to deliver a couple of them."

"You do," Wragge remarked. "Because it is a very serious topic for people who are not familiar with it. It's about the basically the AIDS epidemic when it first came out in New York and then around the country in the early '80s."

Parsons said no one knew what AIDS was at the time.

He said, "They were having trouble getting attention paid to it and things like that. In the end, it's a very human story of people coming together and getting something done. And showing love for one another. You know. If that doesn't sound too cheesy that's exactly what it is."

You can see "The Big Bang Theory" on Thursday nights at 8/7c on CBS.