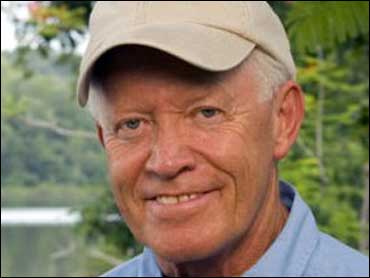 On "Survivor: Guatemala, Jim Lynch was not ejected. It looked more like a Mayan sacrifice.

It was not long before the contestants found out their game was going to be the hardest ever, particularly for Lynch's Nakum tribe.

"I couldn't believe it," Lynch says about the grueling 11-mile race through the thick jungle, "We thought maybe we can navigate a little bit by the stars. But to give you an idea, the canopy of the jungle was so thick you couldn't even see the stars."

"I've never been through anything like it," the retired fire captain and former Marine says,"Couple with that, the humidity and the heat, 90 percent, 95 percent humidity and 120 degrees. Then in the mud, and it rains."

While Nakum got to their destination first, the men paid a high price feeling cramp pains caused by severe dehydration.

Lynch notes, "That's the most compelling question for me, why did the Nakum guys, with the exception of one guy, go down, what was up with that? These are in-shape guys. Fit guys."

Lucky for the tribe, nurse practitioner Margaret Bobonich was at hand to assist, but Lynch points out, "You could pour all the water you want on somebody's head. If you don't have the IVS, you're not going to do anything."

Lynch was among those down, but that is not why he got the boot. He was sent home because he popped the bicep muscle during the immunity challenge.

"When we initially put the boat in the water, I snatched it up maybe a tenth of a second before everybody else. It just tore that bicep," Lynch explains, "I tried to continue as best as I could, but I was still operating at 50 percent. Just a nasty break is all."

Still hurting, he says, "I'm trying to rehab but it's really slow. The older we get, the tougher it is to rehab those things."

Now that he is out of the game what does he think of Bobby Jon Drinkard and Stephenie LaGrossa coming back to the game?

"I thought, wait a minute," he replies, "We're going to throw two more people in the mix going for this million bucks? Some of the kids were going, this is wonderful! I'm going, this ain't that great. Come on! Two more folks going for my million bucks."

In retrospect, it didn't matter. And he says is pleased to had that adventure. "Just having the opportunity to be a part of it was worth it," he says, "Living among the Mayan ruins was amazing."