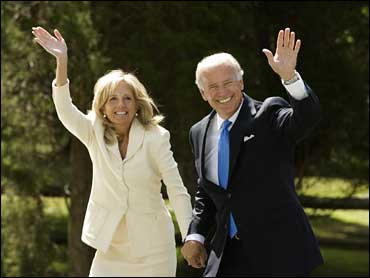 In the 36 years Joe Biden has been in the Senate, there have been countless articles written about him. But that doesn't mean we know everything about the Democratic vice presidential candidate, or his wife, Jill Biden.

For starters, their friends call them "J-Squared."

And, reports CBS News correspondent Thalia Assuras, there are plenty of other things that probably escaped your attention about the longtime lawmaker from Delaware and Jill, whom Biden referred to as "drop-dead gorgeous" in his speech after Barack Obama announced Biden as his running mate.

On the Bidens' first date, it was love at first sight, says their son, Beau Biden, 39, the Delaware attorney general.

"It's a true love story," Beau says. "My mom tells the story of the night she met my dad, when he shook her hand goodbye and she called my grand mom, her mom, and said, 'You know, Mom, I just met the man I think I'm going to marry. I met a real gentleman."

Another fact: Jill, 57, is Biden's second wife. His first, Neilia, and their infant daughter were killed in a 1972 car accident just after Biden was elected to the Senate for the first time. Left to raise two little boys who were also injured in the crash, Biden had to be persuaded to keep the job. He took the oath of office in the boys' hospital room.

Another thing you may not know: During the couple's two-year courtship, the boys, Beau and Hunter, kept asking their dad, "When are WE getting hitched?" Well, the kids not only attended the Bidens' 1977 wedding in New York, they also went along on the honeymoon!

"It was something that my mom and dad wanted to do," Beau Biden explains, "wanted us to be part of, we wanted to be part of. And we had adjoining rooms at a hotel in New York on their first night married."

In 1981, the couple had a daughter, Ashley and, while raising three kids, Jill, who doesn't particularly like politics, worked on multiple college degrees. For the sake of his family, ever since he was elected in 1972, Sen. Biden has taken the train to Washington and back from their home in a suburb of Wilmington, Del. every day the Senate is in session - two hours each way.

"My dad's come home every night for 36 years since 1972 to be home with us, to have dinner with us, to go to our ballgames, to be there for when we wake up in the morning," Beau Biden marveled.

And the thing that might surprise you most? Biden's income is relatively modest compared to his senate colleagues; the couple's joint income last year was just over $300,000.

Jill Biden teaches English at Delaware technical and community college, armed with a Bachelor's degree, two Masters Degrees, and a PhD. And, says Beau, she would probably take on education as a cause, if J-Squared becomes the "second couple."