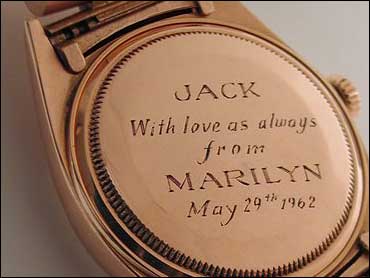 A watch that Marilyn Monroe reportedly gave President Kennedy as a birthday gift has fetched $120,000 at an auction.

Bill Panagopulos, founder of the Alexander Autographs auction house, said the buyer was an East Coast collector, but he didn't release a name.

The watchcase contains a poem, written on a small piece of paper, titled, "A Heartfelt Plea on Your Birthday."

The poem reads:
"Let lovers breathe their sighs
And roses bloom and music sound
Let passion burn on lips and eyes
And pleasures merry world go round
Let golden sunshine flood the sky
And let me love
Or let me die!''

Monroe performed a sultry rendition of "Happy Birthday to You" for Kennedy on May 19, 1962, at New York's Madison Square Garden.

The actress is believed to have given the watch to Kennedy aide Kenneth O'Donnell, who passed it on to the president, Panagopulos said. But when Kennedy saw it, he told O'Donnell to "get rid of it," according to a note that was sold with the watch, Panagopulos said.

"It's the hardest thing I ever had to estimate," Panagopulos said. "Historic relics, especially when there is a hint of scandal attached, defy any attempt by an auctioneer to estimate their selling price."