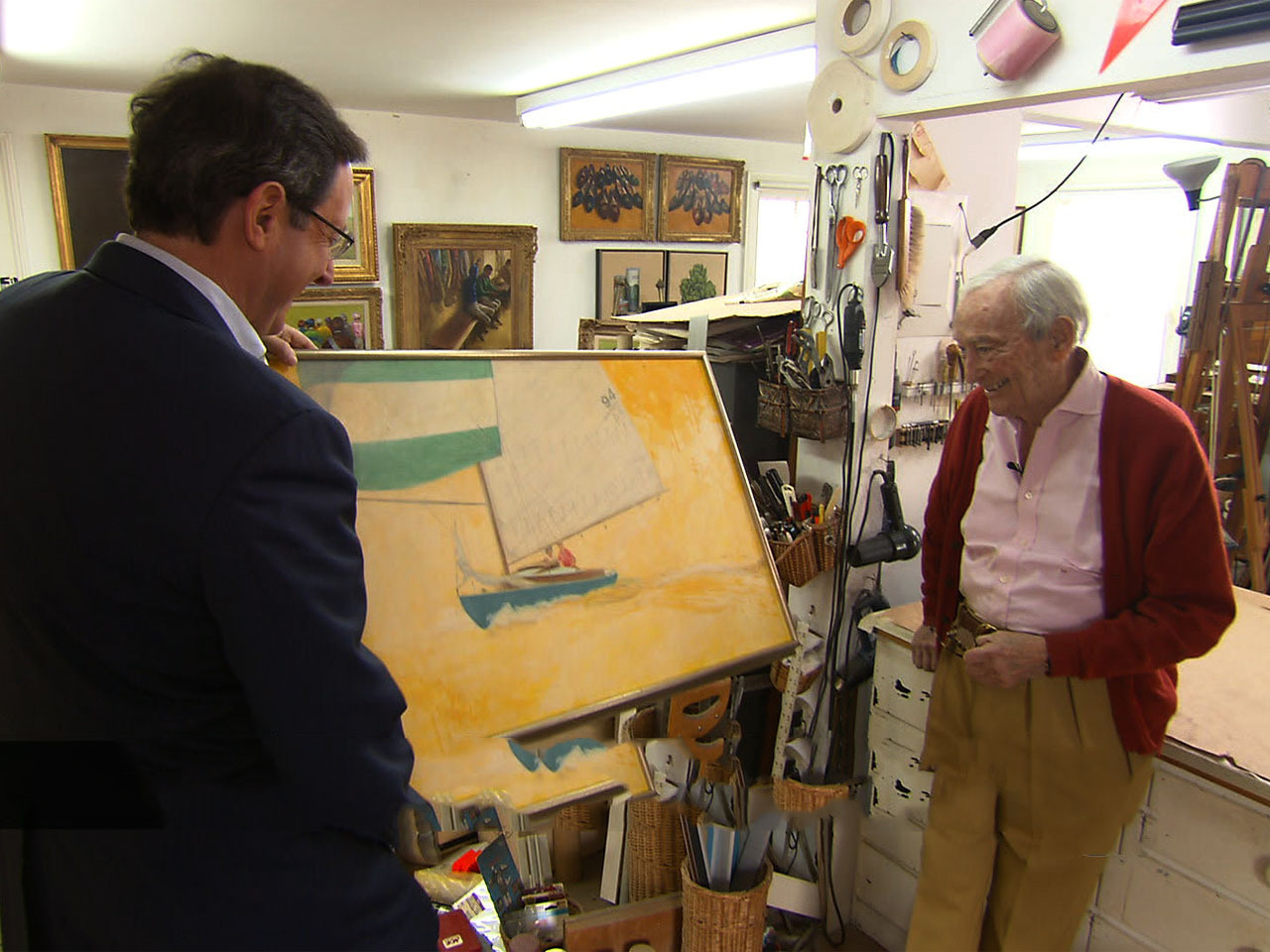 Mason explained on "CBS This Morning," "I stumbled on this painting of president and Mrs. Kennedy sailing, while wandering around the presidential auction. It was painted by my stepfather 50 years ago, so I bid on it and bought it back. Then I learned the story behind it."

The Kennedys: Camelot in pictures

The painting and the artist were reacquainted this week. Mason's stepfather, Henry Koehler, hadn't seen his portrait of the president and Mrs. Kennedy sailing since 1963.

His first response to the painting: "Oh, it even looks like them."

Now 86 and still at work, he was just 36 when the Kennedys commissioned the picture.

Asked how important the commission was to him, Koehler said, "I guess a pretty important one."

So important -- that up in the attic of his home and studio in Southampton, N.Y., he still keeps a file of correspondence. In it, a 1960 cover story he illustrated on sailing. Jackie Kennedy liked a painting of his she saw in Sports Illustrated. "She saw this in the magazine and she wanted to give it to Jack," Koehler said.

It was an anniversary gift. Jackie later appeared in front of it in a newspaper photograph. Koehler said of the article accompanying the photo, "I love what she says here: 'It's by far the prettiest picture in our house and by far the only one I have given him that he actually likes.'"

A few years later, he was asked to paint the picture of the president sailing. Koehler said, "It was commissioned with two others by the Kennedy sisters to give their three brothers for Christmas."

He did sketches of Jack, Bobby and Ted Kennedy aboard the family sailboat, the Victura. One of the Kennedy sisters went to Koehler's studio to approve them. But just after she'd left, Koehler recalled, "I had a call from ... my wife, and she said, 'Henry, don't you have the radio on?'"

It was the afternoon of November 22, 1963. The president had been shot.

Koehler said after the president's death, he thought it was the end of the commission. But then he got a phone call from the Kennedy office asking him how the paintings were coming along.

Koehler said with a laugh, "I said, 'Just fine.' I started to paint with both hands to get them done for Christmas."

The president's Christmas present was delivered to Mrs. Kennedy and he received a thank you letter from Mrs. Kennedy that read, "Dear Henry, you will never know how much the painting of the Victura means to me, and I shall treasure it forever. You are right in saying it will serve as a constant reminder of happier days."

But another letter would come from Jackie -- a rambling note written entirely by hand. In it, she asked Koehler to repaint the picture to remove her from it and to make the president "vague and far away." Her secretary, Nancy Tuckerman, told him that, in her grief, Jackie had been staying up late into the night, writing notes she would not ordinarily have written.

Koehler said, "Nancy said, 'Just don't even acknowledge the letter.' So I didn't. I kept it, of course. But I didn't do anything about it."

And that was the last Mason's stepfather heard of it until it turned up at the auction.

Mason asked, "The first question everybody always asks is, why did you make the background yellow?"

Koehler replied, "I just thought it would make a stronger picture. And if you want a photograph, get a photographer."

Ultimately, Caroline Kennedy gave the painting to David Powers, who had been the president's personal assistant, in appreciation of his running the Kennedy Library for 30 years, and that's how it ended up at auction.

Asked where the painting will hang, Mason said, "That's a good question. I haven't even thought about that yet. I just wanted to bring it home. The auction - there were so many Internet bidders that the auction ran literally through the night and the folks at the McInnis Auction House kindly called me at 4:50 in the morning to say it's up for bid now."

Mason said his strategy was to "outwait just about everybody."

Watch Mason's full report in the video above.