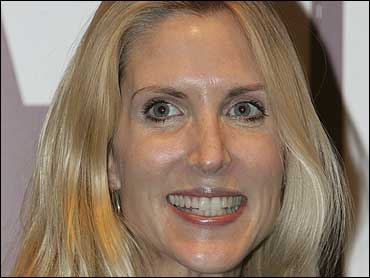 Jewish groups are firing back at Ann Coulter after the blond-tressed pundit said during an interview yesterday that Jews need to be "perfected" into Christians.

The American Jewish Committee issued a statement declaring that it is "outraged" by Coulter's assertion on Donny Deutsch's CNBC show "The Big Idea" that Jews require "perfecting" by becoming Christians.

While appearing on "The Big Idea," Coulter said Judaism should be discarded, that Jews required Christianity to be "perfected," and that Christianity had a "fast track" to God.

"One would think she would know better than to utter such intolerant words," Sideman said.

The National Jewish Democratic Council is going even farther, demanding the media stop interviewing the bestselling author because of her statements on the television program.

The council called on "mainstream media outlets" to stop inviting Coulter as a guest commentator and pundit and strongly condemned her comments that in a perfect world all would be Christians.

"While Ann Coulter has freedom of speech, news outlets should exercise their freedom to use better judgment," said Ira Forman, NJDC's executive director. "Just as media outlets don't invite those who believe that Martians walk the earth to frequently comment on science stories, it's time they stop inviting Ann Coulter to comment on politics."

An article on a conservative-leaning Web Site, WorldNetDaily.com, said, "Not unlike other recent media controversies, this one began when Media Matters, a pro-Democrat media lobby headed by David Brock, noted Coulter's appearance on CNBC's 'The Big Idea.' Presidential hopeful Hillary Clinton recently claimed credit for helping to launch Media Matters."

The Anti-Defamation League also issued a statement saying it "strongly condemns" Coulter for "her anti-Semitic comment."

"Ann Coulter may be a political pundit but she clearly knows very little about religious theology and interfaith issues," the ADL said in a statement. "Coulter's remarks are outrageous, offensive and a throwback to the centuries-old teaching of contempt for Jews and Judaism.

"The notion that Jews are religiously inferior or imperfect because they do not accept Christian beliefs was the basis for 2,000 years of church-based anti-Semitism. While she is entitled to her beliefs, using mainstream media to espouse the idea that Judaism needs to be replaced with Christianity and that each individual Jew is somehow deficient and needs to be 'perfected,' is rank Christian supersessionism and has been rejected by the Catholic Church and the vast majority of mainstream Christian denominations."

Here are some portions of the transcript of the conversation between Coulter and Deutsch:

DEUTSCH: Let me ask you a question. We're going to get off strengths and weakness for a second. If you had your way, and all of your - forget that any of them -

COULTER: UMMMMM (pause) ... It would look like New York City during the Republican National Convention. In fact, that's what I think heaven is going to look like.

COULTER: Happy, joyful Republicans in the greatest city in the world…

COULTER: Well, OK, take the Republican National Convention. People were happy. They're Christian. They're tolerant. They defend America, they -

DEUTSCH: Christian - so we should be Christian? It would be better if we were all Christian?

DEUTSCH: We should all be Christian?

COULTER: Yes. Would you like to come to church with me, Donny?

DEUTSCH: So I should not be a Jew, I should be a Christian, and this would be a better place?

COULTER: Well, you could be a practicing Jew, but you're not.
DEUTSCH: I actually am…

DEUTSCH: That isn't what I said, but you said I should not - we should just throw Judaism away and we should all be Christians, then, or -

COULTER: Well, it's a lot easier. It's kind of a fast track.

COULTER: Yeah. You have to obey.

DEUTSCH: You can't possibly believe that.

COULTER: No, we think - we just want Jews to be perfected, as they say.
DEUTSCH: Wow, you didn't really say that, did you?

COULTER: Yes. That is what Christianity is. We believe the Old Testament, but ours is more like Federal Express. You have to obey laws. We know we're all sinners -

DEUTSCH: In my old days, I would have argued - when you say something absurd like that, there's no -

DEUTSCH: Jews are going to be perfected. I'm going to go off and try to perfect myself -

After a commercial break, the conversation continued.

DEUTSCH: Welcome back to "The Big Idea." During the break, Ann said she wanted to explain her last comment. So I'm going to give her a chance. So you don't think that was offensive?

DEUTSCH: You said - your exact words were, "Jews need to be perfected." Those are the words out of your mouth.

COULTER: No, I'm saying that's what a Christian is.

DEUTSCH: But that's what you said - don't you see how hateful, how anti-Semitic -

COULTER: That isn't hateful at all.

DEUTSCH: But that's even a scarier thought. OK -

COULTER: No, no, no, no, no. I don't want you being offended by this. This is what Christians consider themselves, because our testament is the continuation of your testament. You know that. So we think Jews go to heaven. I mean (Jerry) Falwell himself said that, but you have to follow laws. Ours is "Christ died for our sins." We consider ourselves perfected Christians. For me to say that for you to become a Christian is to become a perfected Christian is not offensive at all.

Editor's Note: An earlier version of this story failed to properly attribute the quotation about Media Matters in paragraph nine to WorldNetDaily.com. This was an oversight and we apologize for that error. That version also contained a narrative transcript of the dialogue between Ann Coulter and Donnie Deutsch that appeared on WorldNetDaily and in similar form on Media Matters for America and other sites. We have replaced it with the traditional transcript for clarity.