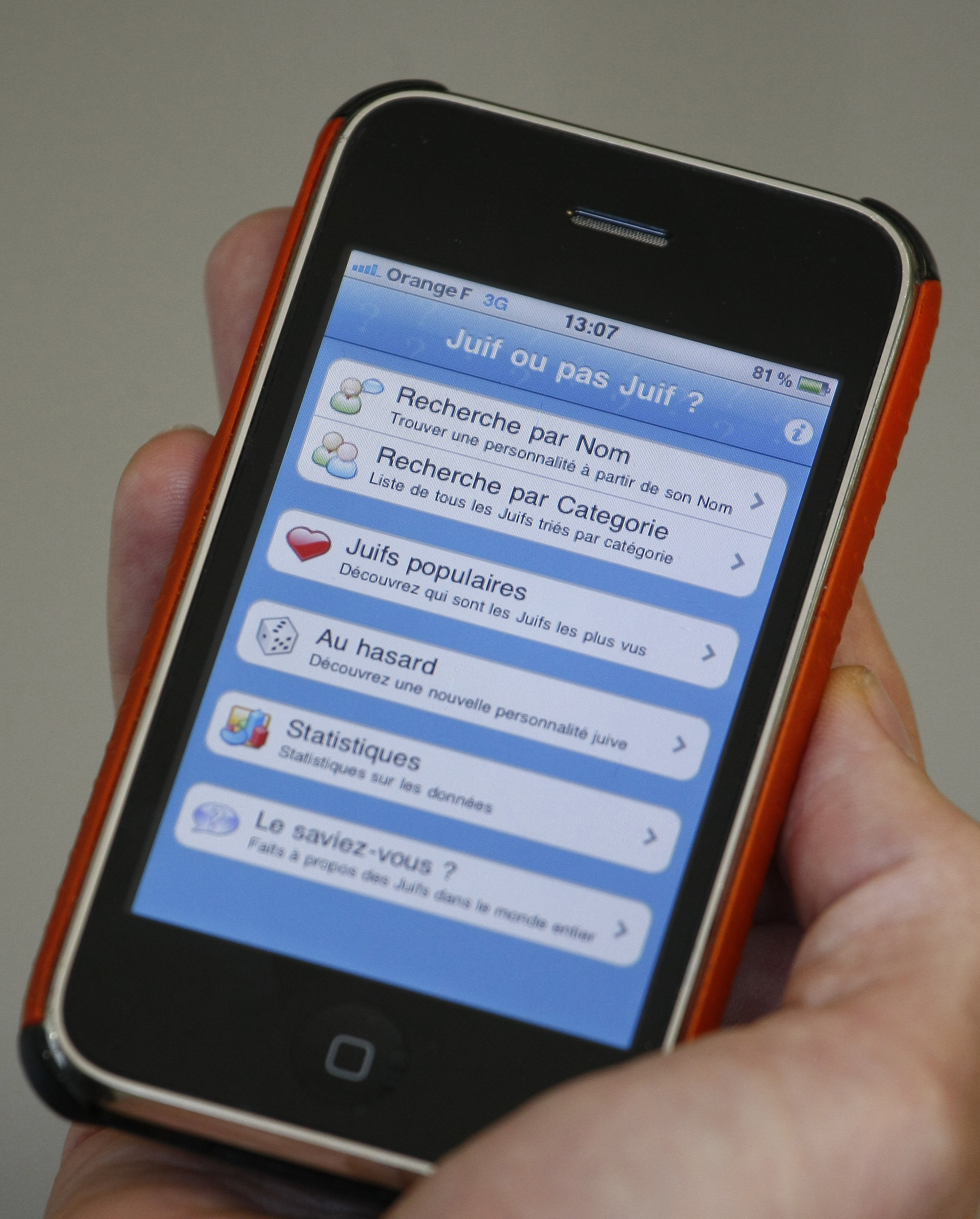 PARIS - A French anti-racism group has threatened to sue Apple over an iPhone application called "A Jew or Not a Jew?" that allows users to consult a database of celebrities and public figures to determine whether they are Jewish or not.

Under the French penal code, stocking personal details including race, sexuality, political leanings or religious affiliation is punishable by five-year prison sentences and fines of up to euro300,000 ($411,870).

Such laws were enacted in the decades following the Holocaust, which saw some 76,000 Jews deported from Nazi-occupied France to concentration camps. Fewer than 3,000 returned alive.

In a statement, SOS Racisme called on Apple to remove the app the from its online store and be more vigilant about the applications it sells.

Apple France and its European headquarters did not immediately return several calls for comment.

"It's not only shocking but also illegal," Prasquier told The Associated Press in a telephone interview Wednesday. "In France, we make a very important distinction that doesn't exist in the same way in the United States between the public and private spheres. If someone wants something as personal as his religion to remain private, it must remain that way."

Johann Levy, a 35-year-old Franco-British engineer of Jewish origin, developed the application, according to Le Parisien newspaper. In an interview published Wednesday, Levy said he developed the app to be "recreational.

"I'm not a spokesman for all Jews, but as a Jew myself I know that in our community we often ask whether a such-and-such celebrity is Jewish or not," he is quoted as saying.

"For me, there's nothing pejorative about saying that someone is Jewish or not," he said. "On the contrary, it's about being proud."

He said he compiled information about famous people around the world from various online sources.

Despite the French state's attachment to secular values, the question of public figures' religious affiliation continues to be a matter of some interest to the French public. On Google's French search engine, when a user types the name of a French celebrity, a top suggested follow up word is "Jew?"

Prasquier said that while he didn't think the phenomena suggested that France is more anti-Semitic than other countries: "because of our difficult historical memories here, we perhaps pay attention to such behavior more" than elsewhere, he said.

"A Jew or Not a Jew," or "Juif ou pas juif" in French, allows users to search its database by entering a celebrity's name or to search by categories of celebrities. It is one of more than 425,000 apps available on the Apple Store France, according to the site.