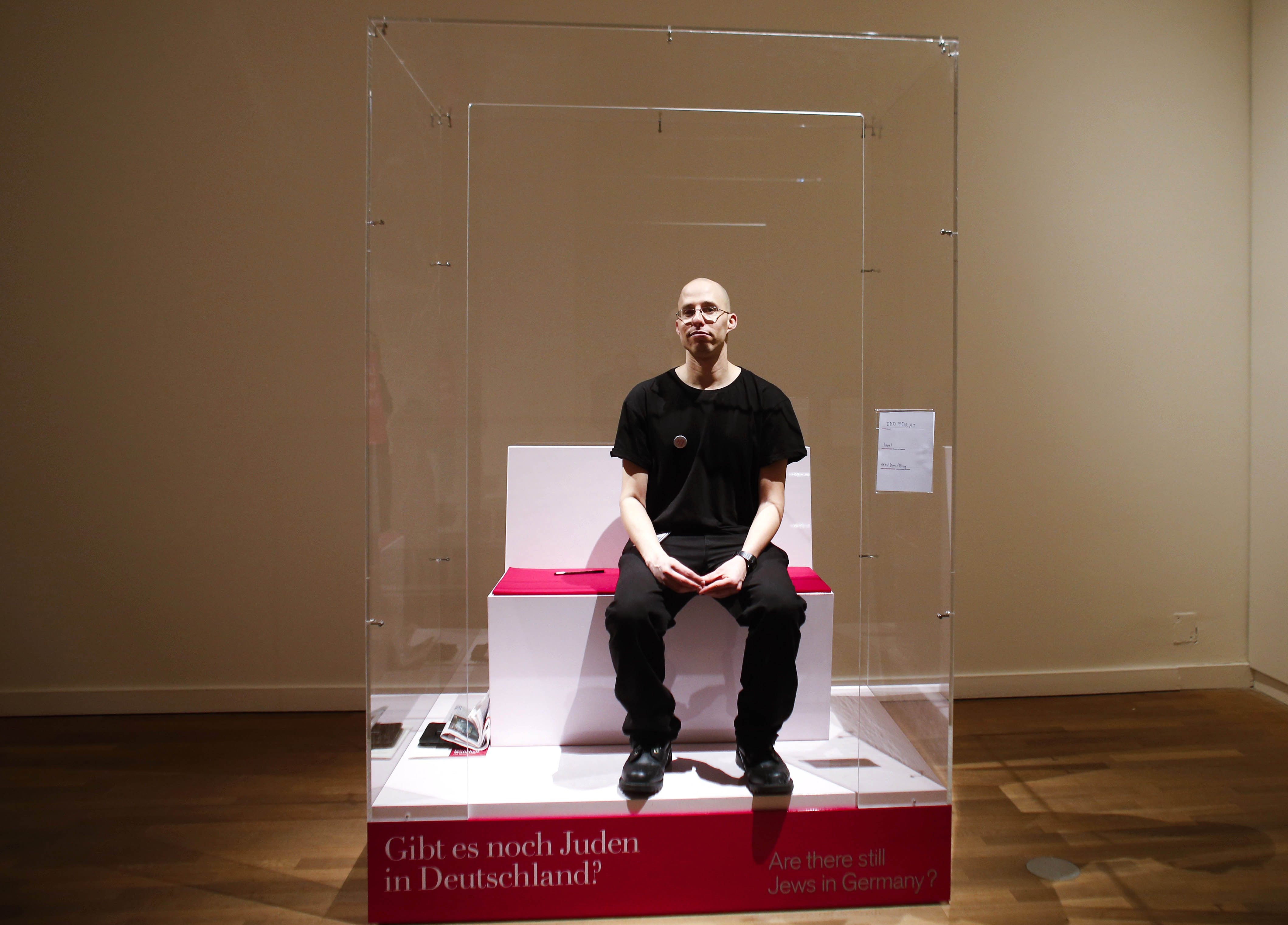 BERLIN "Are there still Jews in Germany?" "Are the Jews a chosen people?"

Nearly 70 years after the Holocaust, there is no more sensitive an issue in German life as the role of Jews. With fewer than 200,000 Jews among Germany's 82 million people, few Germans born after World War II know any Jews or much about them.

To help educate postwar generations, the Jewish Museum in Berlin offers a Jewish man or woman to sit inside a glass box for two hours a day through August to answer visitors' questions about Jews and Jewish life. The base of the box asks: "Are there still Jews in Germany?"

"A lot of our visitors don't know any Jews and have questions they want to ask," museum official Tina Luedecke said. "With this exhibition we offer an opportunity for those people to know more about Jews and Jewish life."

But not everybody thinks putting a Jew on display is the best way to build understanding and mutual respect.

Since the exhibit — "The Whole Truth, everything you wanted to know about Jews" — opened this month, the "Jew in the Box," as it is popularly known, has drawn sharp criticism within the Jewish community — especially in the city where the Nazis orchestrated the slaughter of 6 million Jews until Adolf Hitler's defeat in 1945.

"Why don't they give him a banana and a glass of water, turn up the heat and make the Jew feel really cozy in his glass box," prominent Berlin Jewish community figure Stephan Kramer told The Associated Press. "They actually asked me if I wanted to participate. But I told them I'm not available."

The exhibit is reminiscent of Holocaust architect Adolf Eichmann sitting in a glass booth at the 1961 trial in Israel which led to his execution. And it's certainly more provocative than British actress Tilda Swinton sleeping in a glass box at a recent performance at the Museum of Modern Art in New York.

Eran Levy, an Israeli who has lived in Berlin for years, was horrified by the idea of presenting a Jew as a museum piece, even if to answer Germans' questions about Jewish life.

"It's a horrible thing to do — completely degrading and not helpful," he said. "The Jewish Museum absolutely missed the point if they wanted to do anything to improve the relations between Germans and Jews."

But several of the volunteers, including both German Jews and Israelis living in Berlin, said the experience in the box is little different from what they go through as Jews living in the country that produced the Nazis.

"With so few of us, you almost inevitably feel like an exhibition piece," volunteer Leeor Englander said. "Once you've been `outed' as a Jew, you always have to be the expert and answer all questions regarding anything related to religion, Israel, the Holocaust and so on."

Museum curator Miriam Goldmann, who is Jewish, believes the exhibit's provocative "in your face" approach is the best way to overcome the emotional barriers and deal with a subject that remains painful for both Jews and non-Jews.

"We wanted to provoke, that's true, and some people may find the show outrageous or objectionable," Goldmann said. "But that's fine by us."

The provocative style is evident in other parts of the special exhibition, including some that openly raise many stereotypes of Jews widespread not only in Germany but elsewhere in Europe.

One includes a placard that asks "how you recognize a Jew?" It's next to assortment of yarmulkes, black hats and women's hair covers hanging from the ceiling on thin threads. Another asks if Jews consider themselves the chosen people. It includes a poem by Jewish author Leonard Fein: "How odd of God to choose the Jews. But how on earth could we refuse?"

Yet another invites visitors to express their opinion to such questions as "are Jews particularly good looking, influential, intelligent, animal loving or business savvy?"

Despite the criticisms, the "Jew in the Box" has proven a big hit among visitors.

"I asked him about the feelings he has for his country and what he thinks about the conflict with Palestine, if he ever visited Palestine," visitor Panka Chirer-Geyer said. "I have Jewish roots and I've been to Palestine and realized how difficult it was there. I could not even mention that I have Jewish roots."

On a recent day this week, several visitors kept returning to ask questions of Ido Porat, a 33-year-old Israeli seated on a white bench with a pink cushion.

One woman wanted to know what to bring her hosts for a Shabbat dinner in Israel. Another asked why only Jewish men and not women wear yarmulkes. A third inquired about Judaism and homosexuality.

"I guess I should ask you about the relationship between Germans and Jews," visitor Diemut Poppen said to Porat. "We Germans have so many insecurities when it comes to Jews."

Viola Mohaupt-Zitfin, 53, asked if Porat felt welcome as a Jew living among Germans "considering our past and all that."

Yes, Porat said, Germany is a good place to live, even as a Jew. But the country could do even more to come to terms with its Nazi past, he added. He advised the would-be traveler than anything is permissible to bring to a Shabbat dinner as long as it's not pork.

"I feel a bit like an animal in the zoo, but in reality that's what it's like being a Jew in Germany," Porat said. "You are a very interesting object to most people here."

Dekel Peretz, one of volunteers in the glass box, said many Germans have an image of Jews that is far removed from the reality of contemporary Jewish life.

"They associate Jews with the Holocaust and the Nazi era," he said. "Jews don't have a history before or after. In Germany, Jews have been stereotyped as victims. It is important that people here get to know Jews to see that Jews are alive and that we have individual histories. I hope that this exhibit can help."

Still, not everyone believes this is the best way to promote understanding.

Rabbi Yehuda Teichtal from the Jewish Chabad community in Berlin said Germans who are really interested in Jews and Judaism should visit the community's educational center.

"Here Jews will be happy to answer questions without sitting in a glass box," he said.