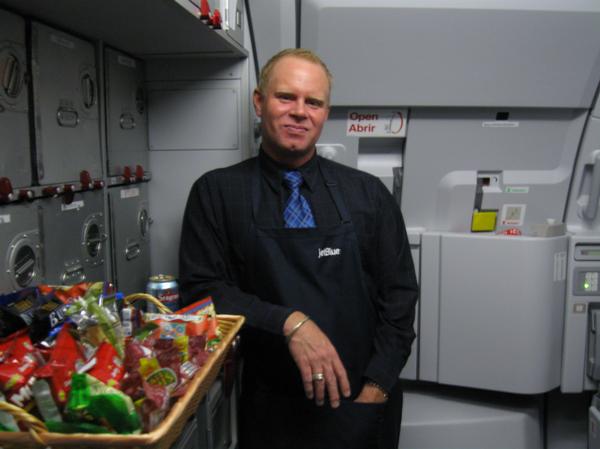 (CBS/AP) NEW YORK  - Steven Slater, a fed-up flight attendant whose spectacular exit down an emergency chute made him a national sensation, completed his court-ordered treatment program Wednesday and was sentenced to a year of probation.

Slater avoided jail time for his stunt when he pleaded guilty to attempted criminal mischief and agreed to undergo counseling and substance abuse treatment. On Wednesday, he was allowed to withdraw the plea on the more serious charge and plead guilty to a lesser charge after successfully completing his yearlong program.

"That was one moment, that was not indicative of who I am," Slater said, adding that he was moving from New York to California and that he planned to write a memoir about his 20 years in the airline industry. "I feel like I'm in a much better place. I have control over my life."

The former JetBlue attendant admitted he pulled the emergency chute on Flight 1052 from Pittsburgh on Aug. 9, 2010, after the plane landed at John F. Kennedy International Airport. He went on the public-address system, swore at a passenger who he claimed treated him rudely, grabbed a beer and slid down onto the tarmac.

Slater's departure made him a hero to put-upon workers everywhere who have fantasized about quitting in a blaze of glory. But Queens District Attorney Richard Brown said it was no laughing matter. Brown scolded Slater - and the public - for not taking his actions more seriously. It cost $25,000 to fix the slide, and the plane had to be taken out of service, causing flight delays.In addition, the airline claimed that someone could have gotten hurt  - emergency slides deploy with potentially deadly force.

Brown said Wednesday he was satisfied with the outcome of the case and it "benefits society by fairly balancing the seriousness of the charges against the defendant's need for rehabilitation."

Slater, who has no criminal history, said he cracked under pressure because of his terminally ill mother, recently deceased father and health problems of his own, including HIV. A mental-health evaluation determined that Slater has a clinical disorder and alcohol-abuse problems. He was treated through the Queens Mental Health Court, an alternative to more traditional criminal justice.

JetBlue Airways Corp. suspended Slater after the incident and he resigned a year ago, leaving him unemployed. He must pay his former employer $10,000 in restitution, which is $831.25 a month.