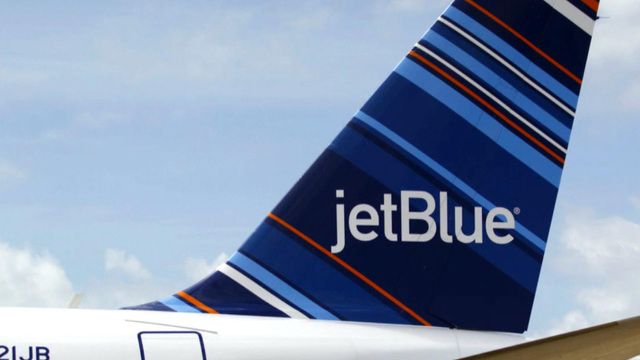 A fire on board forced a JetBlue flight to make an emergency landing Tuesday.

Airport officials said the fire was caused by a lithium battery in an electronic device.

Flight 915 left New York's JFK airport early Tuesday evening and was headed for San Francisco, but not long after the flight took off, smoke started pouring out of a backpack.

That's when the pilot decided to divert to Grand Rapids, Michigan.

"We're at 35,000 feet and all of a sudden we hear an announcement and we look back in row 25 and we saw everybody standing up and smoke coming around and we didn't know what was going on," said passenger Alan Honniball who was on the flight with his daughter Kailey.

"I had no idea what was going on. I was kind of scared…I didn't know what to think," Kailey said.

She says the smoke came from a portable laptop charger in a back-pack.

The fire was out before they landed, but the plane was on the tarmac in Grand Rapids, Michigan for nearly three hours as emergency crews removed the device and made inspections.

In a statement, JetBlue confirmed flight 915 diverted, "following reports of smoke emitting from a carry-on bag holding an electronic device."

Lithium batteries have drawn attention recently for unexpectedly catching fire in some devices.

Most rechargeable electronic devices, like laptops, are powered by lithium-ion batteries.

According to the FAA, this year there have been 12 fire-related incidents on flights caused by lithium batteries or lithium battery-powered devices.

As the Department of Homeland Security considers a ban on laptops on flights from Europe, U.S. carriers are expressing concerns over storing lithium-powered devices in cargo holds, where a fire could burn unchecked.

Passengers say crew members responded quickly to the incident and everyone remained calm.

Flight 915 landed safely in San Francisco early Wednesday morning. No one on board was hurt.

After a Walmart truck rammed into Tracy Morgan's limousine bus in June, Morgan and two others were critically injured and comedian James McNair died in the crash

Posting a negative review online can get you sued
Thanks for reading CBS NEWS.
Create your free account or log in
for more features.
View CBS News In
CBS News App Open
Chrome Safari Continue
Be the first to know
Get browser notifications for breaking news, live events, and exclusive reporting.