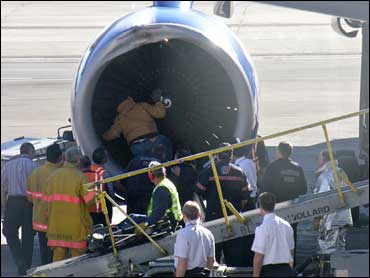 A United Airlines jet returned safely to the Denver airport Tuesday after a bird was sucked into one of its engines shortly after takeoff.

The engine that was struck continued to operate and the second engine wasn't affected, airline spokeswoman Megan McCarthy said. A passenger said the bird hit the right engine.

None of the 151 passengers and crew was injured.

The Boeing 757 had just left for San Francisco when the bird strike happened. McCarthy said the pilot's decision to return to the airport was a precaution.

A US Airways jet splash-landed in New York's Hudson River on Jan. 15 after a collision with a flock of birds knocked out both engines. All 155 aboard survived.

A passenger on the United flight, Frank Crowe of Chicago, said the pilot announced after landing, "It appears we hit a very large bird, something like an eagle."

Crowe said "there was definitely panic but there wasn't hysteria" after the bird strike.

"We heard a large thump like we hit something, and the pitch of the engine changed dramatically to the point that it got real quiet, and there was a rattling, wheezing noise," Crowe said.

Crowe said passengers applauded when the plane landed. He said that later, from the airport concourse, he could see a dent on top of the engine housing. He said mechanics climbed into the engine to inspect it.

FAA statistics show 257 "wildlife aircraft strikes" at Denver International Airport last year. The statistics don't say how many were birds or what parts of the aircraft were hit.

Nationwide, the FAA reported 5,456 bird strikes that damaged aircraft last year, but the agency doesn't say how many birds were sucked into engines.

"They're getting more publicity because of what happened in New York," he said.