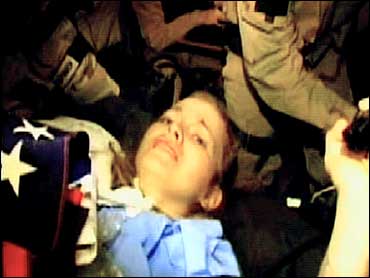 According to the Washington Post, Rehaief said "Thank you so much," on accepting the award, but said nothing further because of a book contract. He wore a patch over an eye that was injured by shrapnel during one of his clandestine trips to provide information to U.S. troops.

The bar association asked the media to avoid taking photographs of al-Rehaief, his wife and 5-year-old daughter for security reasons.

Al-Rehaief and his family were granted asylum in the United States last month and plan to settle in the Washington, D.C., area. He has been offered a job with the Livingston Group, a Washington lobbying firm, said Claire de Matteis, senior counsel to Delaware's Sen. Joseph Biden, and a member of the bar association's executive committee.

He has undergone surgery on his eye, but it is not clear how much of his vision will be restored.

Pfc. Lynch, a 20-year-old Army supply clerk, was captured March 23 after her 507th Maintenance Company convoy was ambushed in the southern Iraqi city of Nasiriyah. She was picked up at a hospital in the city on April 1 after al-Rehaief mapped out her location for U.S. Marines.

There are conflicting reports on whether the operation to retrieve Lynch met armed resistance, as U.S. Central Command has implied, or encountered only hospital staff and patients, as witnesses contend.

The lawyer, whose wife Iman worked at the hospital where Lynch was treated, told reporters in Iraq that he saw Lynch being slapped and decided to make two trips to tell U.S. soldiers about the POW, and provide hand-drawn maps.

De Matteis presented the award to al-Rehaief after Biden, the ranking Democrat on the Foreign Relations Committee, was detained in Washington by Senate business.

Homeland Security Secretary Tom Ridge said the lawyer and his wife and 5-year-old daughter arrived in the United States earlier this month after Homeland Security granted them "humanitarian parole."

On Monday, the family was granted asylum by the Bureau of Citizenship and Immigration Services. They can now apply for American citizenship.

"Mr. Al Rehaief should know Americans are grateful for his bravery and for his compassion," Ridge said.

The Post reports the Iraqi family has embraced American culture so far, eating at McDonald's and attending a Kentucky Derby party.

Rehaief has apparently not been able to contact his father or six siblings since Lynch's rescue.

Lynch suffered a head wound, spinal injury and fractures to her right arm, both legs and her right foot and ankle. She is being treated at Walter Reed Army Medical Center in Washington.

Her doctor told NBC Thursday that Lynch is recovering well from her injuries, but has no memory of her capture or captivity.

Her brother Greg Lynch, also a soldier, told the CBS News Early Show on Thursday that his sister still cannot walk on her own and does not know when she will leave the hospital.