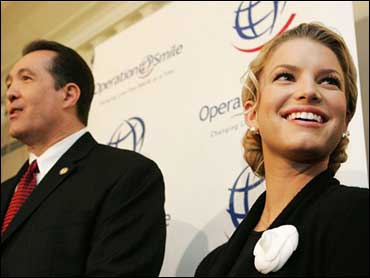 The Hollywood starlet and tabloid cover girl was in Congress on Thursday to lobby for Operation Smile, a nonprofit organization that provides reconstructive surgery to children with facial deformities. Everyone was asking, however, why she turned down an invitation to attend a Republican fundraiser with Washington's top star, the president.

"We went back and forth, and we could never get the details worked out," said her father and manager, Joe Simpson. "When it became obvious that it was not just a state dinner, it was more of a fundraising event — that is the wrong purpose of why we are here."

Joe Simpson was adamant that his family are "big supporters" of the president.

"We are huge fans of him and of his family, his girls," Simpson said. "Jessica loves the heck out of him."

In fact, Simpson said they were still trying to squeeze in a meeting with the chief executive.

"We are trying to get in and out," he said. He could not confirm whether a meeting would take place.

Simpson, a singer best known for her denim-cutoff-wearing role in the movie "The Dukes of Hazzard" and the MTV reality show "The Newlyweds" with estranged husband Nick Lachey, came to Washington to promote Operation Smile.

The actress, who refused to comment on the fundraiser, is scheduled to head back to New Mexico later Thursday to resume shooting in that state of her movie, "Employee of the Month," according to publicist Rob Shuter.

Rep. Tom Reynolds, chairman of the Republican campaign committee hosting the fundraiser, said the group had hoped Simpson would attend.