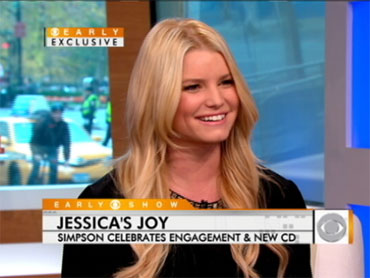 The singer-actress spoke with "Early Show" co-anchor Harry Smith about the exciting news that she says came as a shock to her. They also chatted about he release of "Happy Christmas," a brand new collection of holiday classics and original songs.

Not only does her new CD have songs that will touch your heart, Simpson also includes adorable photos of herself and her family celebrating Christmas through the years.

Now, Johnson will officially part of that family -- and the Christmas photos. Simpson revealed how her soon-to-be hubby popped the question.

"He's the most special part of my life and my day," Simpson said of her new finace.

What does Simpson's rock look like -- and how did Johnson ask for her hand in marriage?