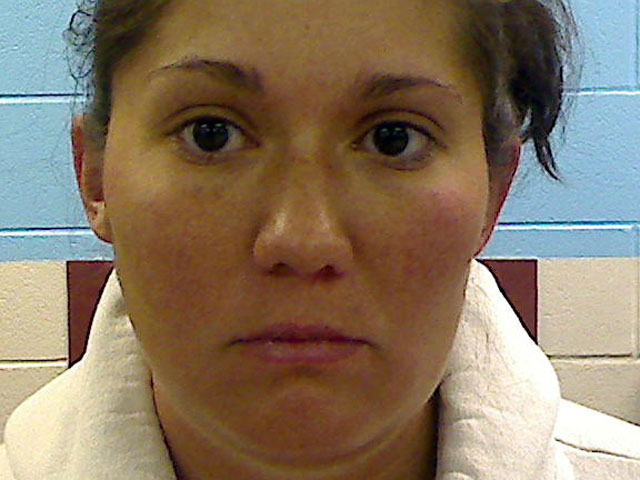 (CBS/AP) MONTGOMERY, Ala. - The woman who allegedly forced her 9-year-old stepdaughter to run to death has given birth to a new baby.

Jessica Mae Hardin, 27, delivered the child under guard Thursday. Her 3-year-old son has been placed with a relative and the newborn will likely be given to the same relative once the baby leaves the hospital, said state Department of Human Resources spokesman Barry Spear.

Hardin and her mother-in-law, Joyce Hardin Garrard, 46, were charged Wednesday in the death of Savannah Hardin. Authorities say the girl was forced to run for three hours on February 17 as punishment for lying about eating a candy bar. At around 6:45 p.m. Jessica Hardin called 911, telling dispatchers Savannah was having a seizure and was unresponsive.

According to preliminary pathology reports the little girl was extremely dehydrated and had a very low sodium level - a chemical necessary to prevent seizures and dehydration.

The girl's father, Robert Hardin, who works for the U.S. State Department, was in Pakistan when he was informed of Savannah's death, according to CNN, and took eight flights to get home to Alabama where his daughter was on life support.

He eventually made the decision to take her off life support and she died Monday.

According to court records, Robert Hardin filed for divorce from Jessica Hardin in August 2010. In his complaint, he said his wife was bi-polar and had alcoholic tendencies. He accused her of previously having run off with the couple's own child.

In her response, Jessica Hardin denied all of his allegations and five months after filing, the two asked a judge to dismiss their case.

Etowah County District Attorney Jimmie Harp said he will decide whether to pursue capital murder charges against Jessica Hardin and Joyce Garrard within the next few days. Capital murder carries a possible death sentence if convicted.

Bond for Hardin and Garrard has been set at $500,000 each. A defense attorney for Garrard said the woman has been falsely accused.

"It is my belief Ms. Garrard will be vindicated ... and found not guilty of the allegation against her," attorney Dani Bone wrote in a statement.