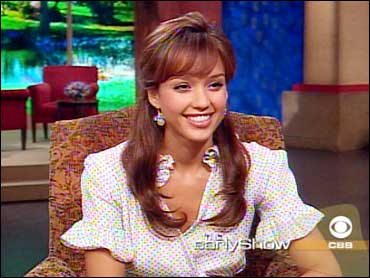 After starring in the spring's biggest hit, "Sin City," Jessica Alba looks to keep her winning streak rolling into the fall with the big sea adventure "Into The Blue," which is set in the Bahamas.

"I get to get paid to go scuba diving for four months in the Caribbean? Fine!" Alba tells The Early Show co-anchor Hannah Storm.

She was not aware that most of the filming was going to take place during the chilly winter months in waters frequented by sharks.

"The director (John Stockwell) was pretty adamant there was going to be no digital sharks," Alba says. "Basically any shark in the area came around and they plopped us in the middle. Giant, wild sharks around us all the time throughout the entire movie."

Alba says sharks are "not smart animals, which is why people do get bit once in a while. I was wearing a wet suit that was silver. So when I move around, it believed my head was a fish. So this shark with his mouth open was coming towards my head. I pushed it away because I freaked out. And the director later told me that that was happening to my double all day. He was like, 'I wasn't sure if it was going to happen to you.' I'm like, 'Thanks for the heads up!' "

Her character, Samantha "Sam" Nicholson, her boyfriend Jared Cole, played by Paul Walker of "The Fast and the Furious," and two other friends come upon a legendary shipwreck that is rumored to contain millions of dollars in gold.

When Alba worked on "The New Adventures of Flipper," she started free diving. That experience served her well on this movie, too.

"Free driving is like an extreme sports version of snorkeling," Alba says. "That's about 50 feet deep. And basically what you do is you hold your breath and you wear a weight belt and go down as fast as possible and hold your breath for minutes at a time."

It got pretty competitive with the other members of the cast, too. "I think I had the longest breath-hold. It was like one minute 20 seconds," she says.

Racers On Taking The Long Road