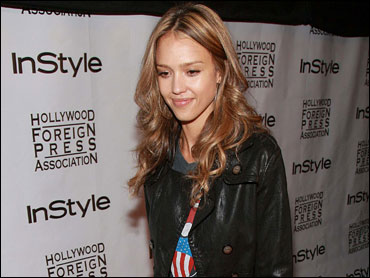 In her latest movie, Jessica Alba falls into a penguin pond, stabs Dane Cook with a dental tool and accidentally tears off her skirt by closing it in a car door.

The role represents a departure for Alba, who gained fame as an action star, first on TV's "Dark Angel," then in films such as "Fantastic Four" and "Sin City."

The 26-year-old actress, whose current crop of projects includes a horror film and a romantic comedy with Mike Myers, talked with The Associated Press about her dream career, her love of science and what it's like to be one of the world's sexiest women.

AP: What drew you to the role in "Good Luck Chuck"?

Alba: I loved that the girl in this film, more than any other film than I had read, certainly in this genre, was doing all the physical comedy. Usually the girl does one trip here or there, right when it's cute, but for the most part it's usually the guy that gets to do all the fun stuff. ... Usually it's not really done. And I liked that she was, you know, the moral center and the good girl.

AP: Were you looking for a comedic project?

Alba: Yeah, I've always been wanting to do comedy. That's one of the main reasons I got into this business in the first place. I've always loved to make people laugh and it was the way that I sort of broke the ice when I was a kid with my friends. I'd always do little skits or do little things, do anything really, to make people laugh. Oddly, in this business, I never really got a shot at it. I'm not good at the half-hour comedy ba-dum-bump stuff. I'm more into the physical comedy.

AP: Did you always want to be an actor?

Alba: I kind of always had it in my mind. I've always loved entertaining. It's kind of in my blood. My grandmother and grandfather were dancing and singing when they met each other. There's a bunch of theater actors and artists, painters, sculptors in my family. So it's all kind of just been what I've always been around. ... I've always really enjoyed it. I've always loved watching movies, the idea of being able to entertain the masses, the power of that. It's just incredible.

AP: Do you have any career role models?

Alba: Definitely Drew (Barrymore). Definitely. Working with her (on "Never Been Kissed") when I was 16 and seeing how she absolutely loves what she does and is still totally inspired and is opening doors for so many women, yeah, she definitely has been a role model. And so young. She's really terrific.

AP: Do you also want to expand to other aspects of the business, like producing, writing and directing?

Alba: Definitely producing. I wouldn't say writing and directing. That's a whole other beast. I respect a) writers and b) directors way too much to think that I could just go in and just write up a little script. People dedicate their lives to telling stories.

AP: What would you be doing if you weren't an actor?

Alba: I don't know. I really don't. I love science. I've always loved biology, like I'm almost a little obsessed with it. It's kind of unhealthy. Science Daily is one of my bookmarks. I'm super dorky. ... But knowing what I know now and going through what I've experienced, I would probably want to maybe be a documentary filmmaker, and be able to use documentaries and in an entertaining way (make) thought-provoking commentaries on social issues that are going on in the world.

AP: Is that something you might pursue at some point?

Alba: Totally. If not do it myself, certainly finance people who have a passion or a knack for it.

AP: What are the pros and cons, personally and professionally, of being considered one of the world's sexiest women?

Alba: I don't really think about it too much. I'm like everybody else. I get insecure about things just like everybody else. I wake up in the morning and think, "What the hell am I going to do with my face today or my hair? What am I going to wear?" People make me feel like ... I'm not a person or superhuman or something because you're on a list that's being put together. But I understand that those magazines and those lists only exist just to give publicity for the magazine and publicity for the project that I'm in, and it's not necessarily completely and totally true.

Alba: I'm kind of living one now. I have to say, working with Mike Myers and being his leading lady in the film ("The Love Guru"), that's huge. ... He's brilliant and I'm really excited about what's happening right now. I try not to think too much about what if I could do this or do that. I kind of like to just take in the moment and go for the ride and enjoy it as much as I possibly can, because in three months it's going to be over and I'll be onto something else.