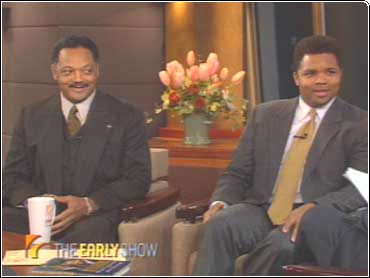 The Reverend Jesse Jackson has been a mover and a shaker in the political arena for decades. Now he's co-written a book about how to accumulate wealth, It's About The Money. His son, Rep. Jesse Jackson Jr., and journalist Mary Gotschall co-authored the book.

Is the Rev. Jackson departing from his field of expertise when he tries to teach people how to manage their money? No, says Jackson, because "money is a political issue."

"I have preached at too many funerals where men leave bills behind and no insurance to take care of their family," Jackson says.

He told CBS Early Show Anchor Bryant Gumbel that he sees the economic emancipation of African Americans as the fourth phase in a historic continuum.

"Just as we taught how to break out of slavery, how to end illegal segregation, how to vote, now the disciplined use of capital is critical to home ownership, to be able to send your child to college. You can't assume because you earn more and spend more that life will get better."

Rep. Jesse Jackson Jr., who represents the second district of Illinois, has served in the House of Representatives since 1995. He got the idea to write this book when he attended a money management seminar at law school.

"I learned more about personal financial management and how to increase wealth than I had in three years of law school, business school and anywhere else," he says.

He points out that among the 800 people at the seminar, he and his wife were the only African Americans.

Congressman Jackson said they wrote this book for "ordinary Americans" who work hard but often live paycheck to paycheck.

"Poor people use credit cards as a substitute for money and they have no real sense of money," said Rep. Jackson. He notes that when many young people graduate from college, "They know how to get in debt, but they don't know how to buy a house, invest in a 401(k) or about life insurance."

In addition to writing this book, the Jacksons are going to help train ministers to get their congregations out of debt.

"We are going to get 140 ministers next year to take a one-week crash course in the market and learn the language of stocks and assets."

This is the second book the Jacksons have written together. The first one was Legal Lynching: Racism, Injustice, and the Death Penalty.