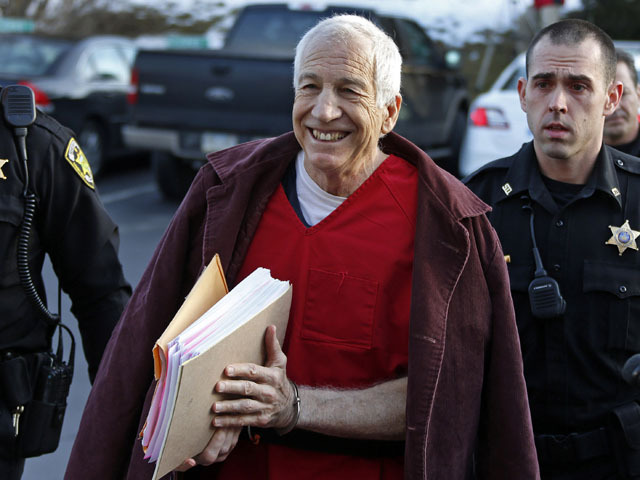 (AP) BELLEFONTE, Pa. - Jerry Sandusky's lawyers argued Thursday that he deserves a new trial on child molestation charges because they didn't have enough time to prepare for the first one.

Pictures: Jerry Sandusky gets 30 to 60 years in prison

The 68-year-old former Penn State assistant coach played no active role in the proceedings, but briefly greeted his wife and supporters beforehand.

At the hearing in Centre County court in Bellefonte, Pa., Sandusky's lawyers cited flaws in the trial, including that they were swamped by about 12,000 pages of documents and other materials. His lawyers also argued that Judge John Cleland should have instructed jurors about the years it took for victims to report he had abused them and that hearsay evidence was improperly allowed.

But prosecutors countered by arguing most of the documents and records were not relevant to the trial. They also got lead defense attorney Joe Amendola to acknowledge that he did not find any he would have used when he reviewed them after the trial.

"Where's the harm?" the judge asked Sandusky defense lawyer Norris Gelman. "That's where I'm hung up on this one."

Cleland did not indicate when he might rule. If Sandusky does not get a new trial - he is also asking to have charges thrown out entirely - he can then appeal to Superior Court, and has indicated he will.

Sandusky was convicted in June 2012 of 45 counts of child sexual abuse covering a period of 15 years and is serving a 30-to-60-year sentence at a state prison. He has maintained his innocence. His arrest tarnished Penn State's vaunted football program and led to the firing of longtime coach Joe Paterno, who died nearly a year ago from lung cancer.

Gelman noted that some of the victims waited more than a decade to disclose their abuse.

"This is a long, long time not to make some kind of report... and it goes to their credibility," Gelman said.

Prosecutor Frank Fina told Cleland that the issue of "failure to report" by the victims was a major theme during the trial. It was brought up during both parties' opening statements and closing arguments during cross-examination of the eight victims who testified against Sandusky, he said.

Amendola's performance at trial and his questioning of witnesses are evidence that a fair trial took place even though the case moved from arrest to verdict in about eight months, Fina said.

"He used everything he had to cross-examine these young men," Fina said.

Amendola, who testified Thursday, said the trial's timetable did not permit sufficient investigation into the accusers' backgrounds.

He also described a scramble to cope with a string of pretrial hearings while trying to adequately analyze the discovery materials. At one point, his copier even broke down.

"Did we look at the material? Yes, we glanced over it," he said under questioning by Gelman.

Amendola recounted how he and co-counsel Karl Rominger sought unsuccessfully to be taken off the case, evidence of their frustration over how quickly things were moving.

After the hearing, Gelman compared Sandusky's odds of a new trial to a three-point shot in basketball, while Fina downplayed the defense's chances of success.

"I think the people of Pennsylvania can be confident this conviction is going to stand," Fina told reporters.

At least 14 students killed in Texas school shooting
Thanks for reading CBS NEWS.
Create your free account or log in
for more features.
View CBS News In
CBS News App Open
Chrome Safari Continue
Be the first to know
Get browser notifications for breaking news, live events, and exclusive reporting.