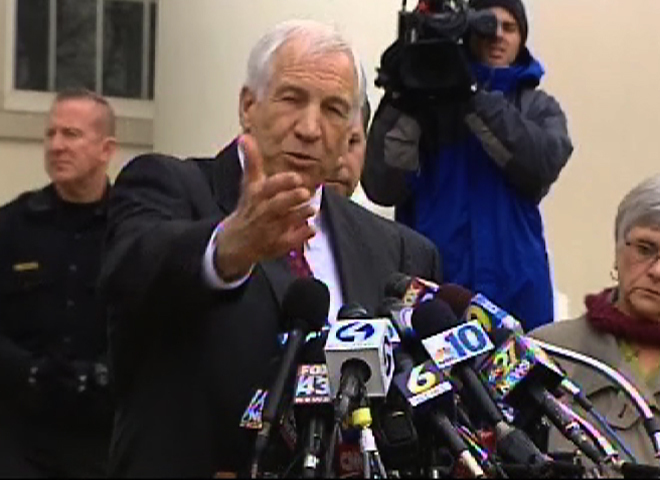 (CBS/AP) BELLEFONTE, Pa. - Jerry Sandusky briefly testified at a pretrial hearing Friday, saying a local jury would be no more of less biased against him in his child sex abuse trial than a jury from anywhere else in Pennsylvania.

The former Penn State assistant football coach told Judge John Cleland he agreed with his attorney's request to have a State College-area jury hear his case and acknowledged he would be waiving his right to appeal a possible guilty verdict on the grounds the local jury was biased.

Cleland wanted to hear directly from Sandusky on the jury question. Prosecutors oppose the use of a local jury, saying an out-of-county jury would be more fair.

"I don't believe that would matter, relative to any place (else) in this state," Sandusky testified.

Defense attorney Joe Amdendola also asked that Sandusky, 68, be permitted to see his grandchildren, a request strenuously opposed by prosecutors.

The state attorney general's office has also asked for tougher bail rules, arguing that Sandusky should remain inside because neighbors and school staff have complained about his presence near the school. A teacher testified that children had noticed him from their classroom and that his presence was disrupting school activities.

Cleland promised a quick ruling on all the issues, including tightening or loosening Sandusky's bail restrictions and the jury-related motion.

Cleland set a tentative trial date of May 14.