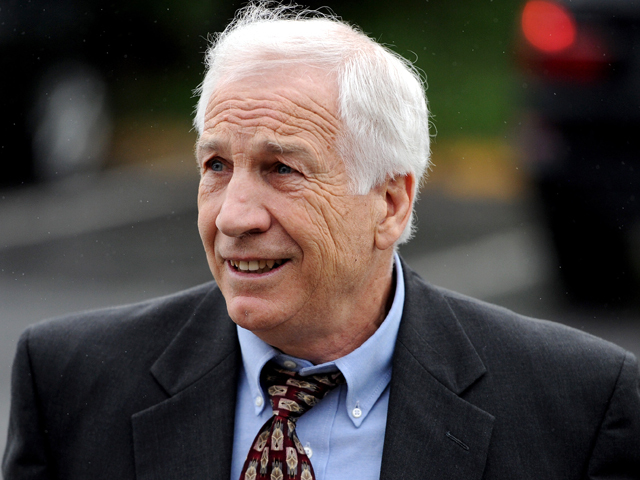 (AP) BELLEFONTE, Pa. - Three of the 16 jurors and alternates needed for former Penn State football coach Jerry Sandusky's child sex-abuse trial were selected Tuesday morning as the high-profile case got under way in earnest after months of legal wrangling and intense publicity.

A middle-aged woman selected told the court she has been a Penn State football season-ticketholder since the 1970s and that her husband works for the medical group where the father of key witness Mike McQueary previously worked. Also selected were a 24-year-old man with plans to attend an auto technician school and a mother of two who works in retail.

Mike McQueary, on leave from the team, has said he saw Sandusky naked in a team shower with a young boy more than a decade ago and reported it to football coach Joe Paterno.

Mike McQueary is also on the prosecution's list, along with young men who have accused Sandusky of abusing them.

During jury selection, Sandusky's lawyer sought to have the Penn State ticketholder eliminated without using one of the eight challenges each side gets. Judge John Cleland turned him down and, after conferring with Sandusky, attorney Joe Amendola allowed her to be chosen.

Among those who were struck from the pool were a nurse who said people make up stories all the time — prosecutors used a challenge for her — as well as a man who had volunteered for the Sandusky-founded charity The Second Mile. Also struck were a mother of 10 who said she has made up her mind and a Penn State fan and township manager who said news coverage of the case has been destructive to her community.

Cleland told the more than 220 potential jurors he would not sequester them, meaning they can spend nights at home during the trial that is expected to last several weeks.

While about a dozen TV news trucks and more than 50 reporters waited outside the courthouse for updates, Cleland urged the jury pool to avoid news accounts or social media postings.

"No one in the world will know as much about this trial as the people sitting in the jury box," Cleland told them.

Sandusky is attending jury selection, and laughed at some of Cleland's humorous remarks to potential jurors. But when Cleland told the pool the nature of the charge, Sandusky put his head down.

More than 600 summonses were sent out to residents in Centre County, the home of Penn State University's main campus. The process of finding the 12 jurors and four alternates could take days.

(Watch TruTV's Jean Casarez break down some of the challenges of the case on "CBS This Morning: Saturday" at left.)

The fact that jurors are being chosen from among people who live in the State College area was a victory for the defense, which had argued against bringing in jurors from elsewhere in the state.

Early in the process, jurors were asked to indicate through a system in which they held up cards whether they had connections to Penn State.

About a dozen signaled that they worked or had retired from the university; another half-dozen said they had spouses who worked for the school.

Four indicated they knew Sandusky. Two said they knew his wife, Dottie, who was not in court on Tuesday.

Two potential jurors indicated they had previously volunteered with The Second Mile.

Of the first group of 40 to be questioned Tuesday morning, Cleland dismissed five for medical reasons or vacation plans.

Looking worn out and concerned, Sandusky didn't say anything during that phase of jury selection, in contrast to the polite "good mornings" exchanged by attorneys to potential jurors.

Cleland said he hoped to get through all the potential jurors on Tuesday, but that prospect appeared highly unlikely.

Some of the alleged victims are expected to testify during the trial, the opening of which is likely to begin on Monday morning. Cleland said the trial may last three weeks.

Prosecutors have claimed that Sandusky groomed boys he met through the charity he founded for at-risk youth in 1977, then attacked them, in some cases in his own home or inside university athletic facilities.

Among the challenges for jury selection are the extraordinarily heavy news coverage of the scandal and the wide reach of The Second Mile.