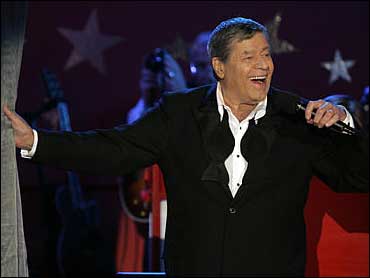 A jubilant Jerry Lewis boasted, "We did it. We did it," as his annual Labor Day Telethon raised a record amount for the Muscular Dystrophy Association.

Lewis has conquered both age and illness to anchor every telethon for more than half of his 81 years. He showed no signs of slowing as he asked for pledges.

While he spent many of the final hours of the 21 1/2 hour show behind a desk, his forays on stage to greet guests were spry and witty. Lewis vowed to "be here every year as long as I'm breathing in and out."

The telecast has raised $1.46 billion to fight the disease since it began in 1966 on a single television station in New York City.