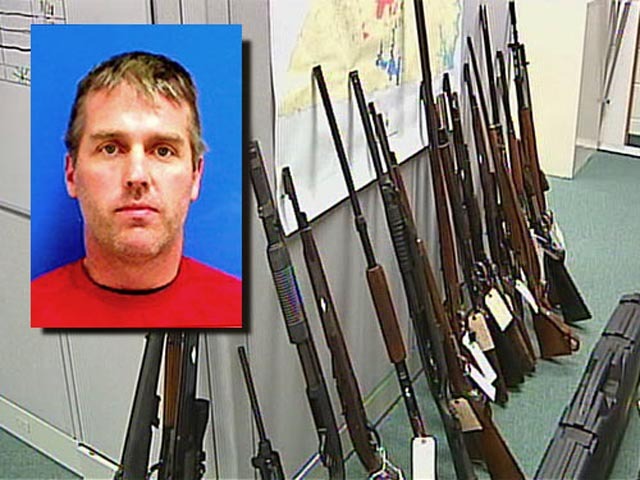 (CBS/AP) - Police in Catawba, North Carolina went to former NASCAR driver Jeremy Mayfield's house on Tuesday night with a search warrant to follow up a tip that there might be stolen property on the house. What they found was a trove of illegal goods, including methamphetamine, forty firearms and nearly $100,000 worth of stolen goods.

Mayfield was arrested on possession of methamphetamine, but the latest reports reveal what else officials found on the scene.

The Lincoln County Sheriff's Office told CBS affiliate WBTV that detectives found dozens of guns, 1 ½ grams of meth and a number of items that had been reported stolen from a trucking company in Lincolnton, N.C.

The firearms ranged from antique guns to high-powered rifles. The guns are currently being run through the Bureau of Alcohol, Tobacco, Fireams and Explosives gun tracing system to determine if any were reported stolen.

Tom Weese, of Lee Family Real Estate, LTD, told WBTV that roughly $65,000 worth of items were stolen from his business last year. He recovered most of his goods Tuesday night after Mayfield's arrest.

"To me they were just thieves," Weese told WBTV. "They just wanted to steal stuff."

The investigation is still ongoing, and Weese believes there will be more arrests to come.

"It wouldn't even be possible for one man to conduct an operation like this," he said. "It's unbelievable that the operations they had going on down there."

Mayfield was suspended from NASCAR indefinitely after failing a random drug test in May 2009. The result stemmed from a test at Richmond International Raceway.

The driver's career began in 1994, and Mayfield posted multiple top-ten finishes throughout his career. His best year was 1997, when he finished 13th in total points driving for former Ford executive and NASCAR team owner Michael Kranefuss.

Following his suspension, Mayfield denied reports that he was using illegal drugs and claimed the results of this test were not accurate. In unsuccessful legal challenges, he claimed the results turned up positive because he took over-the-counter allergy medicine and Adderal for his Attention Deficit Disorder.