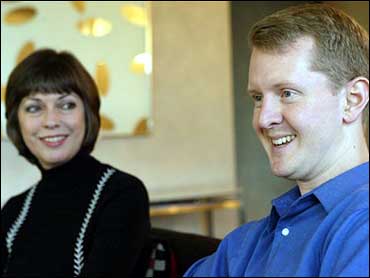 The woman who ended "Jeopardy!" whiz Ken Jennings' 74-game winning streak is a California real estate agent whose own 8-year-old daughter asked for his autograph when they met.

But having an accountant-friend who's nearly impossible to reach at tax time paid off for Nancy Zerg -- big time.

In a victory telecast Tuesday, Zerg beat a pop-culture icon who had achieved an aura of invincibility. Jennings won $2,520,700, a record for a TV game show contestant, since his first appearance June 2.

During his streak, Jennings usually had opponents so thoroughly beaten that the Final Jeopardy question was meaningless to the outcome. But Zerg was within striking range, with $10,000 to Jennings' $14,400, at that point.

The category was business and industry. The clue: Most of this firm's 70,000 seasonal white-collar employees work only four months a year.

Jennings had to think. Out of the corner of his eye, he noticed Zerg had quickly written her reply.

"I was pretty sure before the music ended that was the ballgame," he said.

Even before that, Zerg needed an unusual display of Jennings fallibility to stay in the game. He twice answered wrong on Daily Double questions, which give contestants a chance to make a big wager and increase their lead.

Maybe that's why he paused, ever so slightly, when asked in an interview Tuesday whether he had lost or been beaten. He then graciously gave Zerg credit.

"I would have dwelt on it if I missed something that I knew or didn't phrase it in the form of a question," said Jennings, a computer software engineer from Salt Lake City. "It was a big relief to me that I lost to someone who played a better game than me."

Zerg, a former actress who lives in Ventura, Calif., psyched herself up before the game by repeating to herself: "Someone's got to beat him sometime, it might as well be me."

Hanging out backstage with fellow contestants, she saw some Jennings opponents had essentially lost before the game. She heard one person say that it looked like he was playing for second, and another just wishing not to be humiliated.

"I heard another one say, `It's no great sin to lose to Ken Jennings,' and they went in and lost Ken Jennings," she said. "I thought, `That's no way to play the game."'

He combined an extraordinary breadth of knowledge, uncanny skill at sensing the precise instant to ring his buzzer and a killer competitive instinct hidden behind a baby-faced grin and polite manner.

It made many of the games boring. But "Jeopardy!" executives aren't complaining; ratings were up 22 percent over the same period last time.

Jennings said he'd been thinking about walking away after some future milestone -- 100 wins, perhaps, or $3 million or $4 million in winnings. He said there were about a dozen games where one reply made the difference between winning and losing.

"The fact that they had all fallen my way was beginning to worry me," he said, "because at some point the law of averages was going to kick in."

He wasn't prepared for how much he'd miss the daily competition, though.

"It didn't really hit me that was going to be the hard part," he said. "I thought the hard part would be the loss."

The loss is actually a distant memory and not really a secret: the show was taped in early September and news leaked right away. Video clips of his loss appeared on the Internet Monday.

Neither Jennings nor Zerg expect the record will be broken.

"It's not because things fell the right way," Zerg said. "It's because he's that good."

Jennings, a Mormon, will donate 10 percent of his winnings to his church- - and a European vacation is planned, "probably a really nice one." He'll hardly slip back into anonymity; he's visiting David Letterman and Regis Philbin this week, has a book deal and is open to any commercial sponsorship opportunities.

He's in a new tax bracket now, and H&R Block is making sure he'll always remember the company for other reasons: It has offered him free tax preparation for life.