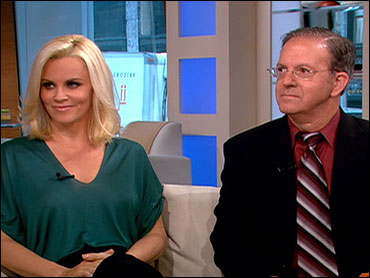 Actress/autism activist Jenny McCarthy has already written two best-selling books, now she is advocating the controversial idea that autism can be prevented or healed in her latest book, "Healing and Preventing Autism: A Complete Guide".

Although the topic may draw the ire of some, McCarthy welcomes the challenge and hopes to create more dialogue about the issue.

McCarthy professes to be a true believer that autism can be healed and prevented.

"Without a doubt, I know that it can," she said. "I am witness to my own child being fully recovered from autism. He's 6 years old now -- he completely lost his diagnosis."

Kartzinel adopted a child and says that after the mumps, measles and rubella vaccine, his son developed symptoms.

Many parents out there with autistic children may be skeptical of these claims and may say that these suggestions have not worked.

"Definitely parents have said this has not worked. And I say to those people, 'You can't give up. The window is not closed,'" McCarthy said. "You have to constantly go back and see what the latest development is with autism treatment. And, you know, for some children, as Dr. Jerry sees, they're just -- they can't come out of it. But for some that can -- why would we stop the ones that can because it didn't work for another family?"

"How rigorous do you have to be if you're going to try and go down some of the guidelines that are in the book?" Smith asked.

"For women that want to get pregnant and are worried about autism, that's why we wrote about things you can do as a woman preparing her body for pregnancy to help prevent autism," she said.

With so many families out there struggling with autism, Smith wondered if these claims would give a false hope.

The actress pointed out that Kartzinel has witnessed firsthand the results from his 10-year-old son.

"He has witnessed children speaking for the first time at age 10," McCarthy said. "So it's very real. Like I said, it's not for everyone. But for some, and isn't that enough?"