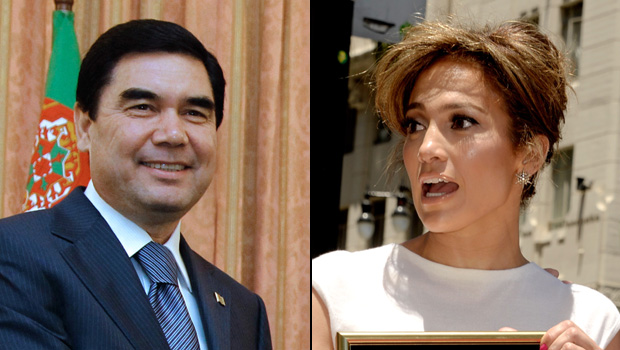 NEW YORK Jennifer Lopez sang "Happy Birthday" to the leader of Turkmenistan during a show, but her representative said she wouldn't have performed there at all if she had known there were human rights issues in the country.

The singer and actress performed in the former Soviet bloc country on Saturday night. A statement released Sunday by her publicist to The Associated Press said the event was hosted by the China National Petroleum Corp. and wasn't a political event.

However, the country's leader, Gurbanguly Berdimuhamedow, did attend. Berdimuhamedow has been criticized for oppressive rule by human rights organizations. Human Rights Watch describes Turkmenistan as "among the most repressive in the world."

"The country is virtually closed to independent scrutiny," says the country's profile on Human Rights Watch's website. "Media and religious freedoms are subject to draconian restrictions, and human rights defenders and other activists face the constant threat of government reprisal. The authorities continue to use imprisonment as a tool for political retaliation and to restrict peoples' right to travel freely.

After a United Nations visit last month, Assistant Secretary-General for Human Rights Ivan Simonovic said the country had made progress in the area of human rights, but "a lot more work is needed to complete this process and to ensure practice is in line with international standards."

Lopez's publicist says the event was vetted by Lopez's staff: "Had there been knowledge of human rights issues any kind, Jennifer would not have attended."

The birthday serenade was a last-minute request made by the corporation to Lopez before she took the stage, and she "graciously obliged," the statement said.

Lopez is the latest celebrity to face scrutiny for performing in countries or for leaders with human rights violations.

In 2011, Oscar-winning actress Hilary Swank profusely apologized after attending a birthday party for Chechen leader Ramzan Kadyrov, who had been accused of torture and killings; she said she didn't have a full understanding of the event.

Beyonce, Nelly Furtado, 50 Cent, Mariah Carey and Usher were paid handsomely to perform at parties linked to the late Libyan leader Moammar Gadhafi. All later announced plans to donate their performance fees to charity and said they hadn't known the leader was connected to terrorism.

Lopez has no other performances scheduled in the country, her publicist said. Her performance fee wasn't disclosed.