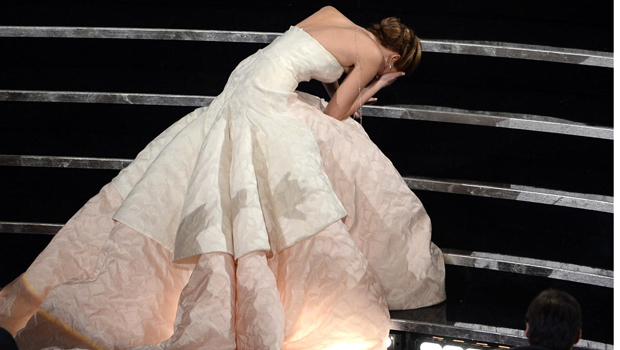 What was going through Jennifer Lawrence's mind as she walked -- and then tripped -- up to the stage to accept her Oscar last year? Cake.

In a new story in W magazine, the 23-year-old actress blamed the sweet confection for that now-famous tumble in that Dior gown as she won the best actress prize for "Silver Linings Playbook."

She said, "I was at the Oscars, waiting to hear  if my name was called, and I kept thinking, Cakewalk, cakewalk, cakewalk. I thought, Why is 'cakewalk' stuck in my head? And then, as I started to walk up the stairs and the fabric from my dress tucked under my feet, I realized my stylist had told me, 'Kick, walk, kick, walk.' You are supposed to kick the dress out while you walk, and I totally forgot because I was thinking about cake! And that's why I fell."

And there you have it. Hollywood starlet foiled by baked goods.

Lawrence may get the chance to accept another accolade this weekend (hopefully without tripping, whether or not cake's on her mind), when she's up for a supporting actress prize at Sunday's Golden Globes for her role in "American Hustle."