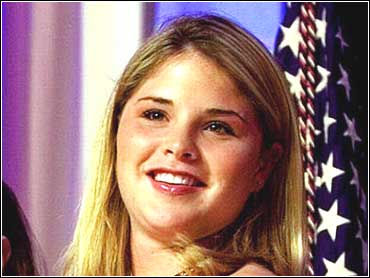 A community court judge agreed Wednesday to postpone the case of President Bush's 19-year-old daughter who is charged with alcohol possession by a minor.

Earle said she expected to reschedule the case in the next couple of days. She could not estimate when the case might come back up. Once rescheduled, Jenna Bush would not necessarily have to appear in court. She could sign a deferral to have her attorney represent her.

Earle said court policy typically dictates that people living in Austin appear in person in court, but that it is not legally required.

Jenna Bush was issued a misdemeanor citation by Austin police early Friday, the day her father returned to the state capital to help dedicate a new history museum.

The teen-ager is a freshman at the University of Texas at Austin.

The ticket is a Class C misdemeanor, the lowest level of misdemeanors.

Undercover Austin police officers issued the ticket while checking for minors in possession of alcohol at nightclubs along the popular East Sixth Street entertainment area.

Assistant Police Chief Mike McDonald said Bush, who was drinking beer, did not appear to be intoxicated.

Bush was one of six who were cited at the bar. She faces a possible $500 fine or community service.

McDonald said two Secret Service agents were outside the bar and did not know Bush was inside drinking.

Earlier this year, Bush found herself in the middle of news surrounding a Mardi Gras party at Texas Christian University in Fort Worth.

TCU students said they saw her escorted by Secret Service agents at the party. A teen-ager who graduated with Bush from high school was cited for underage possession of alcohol. He claimed he was Bush's boyfriend and allegedly called her from jail, the Tarrant County sheriff said.