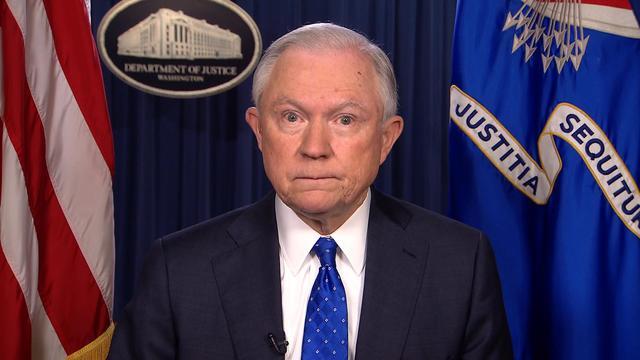 Attorney General Jeff Sessions on Monday defended President Trump's response to the attack in Charlottesville, Virginia, over the weekend, but made clear that it's wrong to equate white nationalists with the people who protested against them.

In an interview on "CBS This Morning," Sessions said that Mr. Trump delivered a long statement Saturday about "violence, bigotry and hatred."

"He condemned it. He called for unity in our country. He was strong about that," Sessions said, adding that a White House spokesman on Sunday "explicitly condemned it by name."

On Saturday, the president condemned the hatred, however, "on many sides," a statement that prompted criticism from both Democrats and Republicans.

Asked if it's wrong to make a moral equivalence between the two groups, Sessions said, "Absolutely."

"Justice will be done. We're coming after these people. It cannot be tolerated in America," he said.

Asked if his home state of Alabama should remove statues of Confederate Gen. Robert E. Lee, Sessions said that cities and states "have a right to decide their monuments and that nobody should use violence to stop them either way."

"I don't believe that's the case," he said. "We will not allow these extremist groups to obtain credibility -- morally, legally. They are unjustified in their actions and their approach to American democracy."