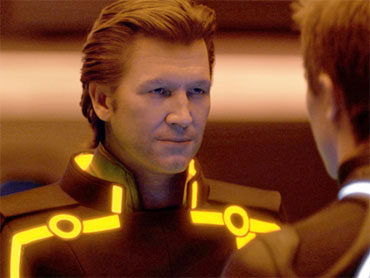 Hollywood has famously had better luck using makeup to make young actors look old - like Russell Crowe in "A Beautiful Mind" - than making old actors look young. But the ability to manipulate images digitally could prove to be a fountain of youth for some.

In "Tron: Legacy," which opens Dec. 17, 61-year-old actor Jeff Bridges will play Kevin Flynn, at his natural age, and a computerized avatar called "Clu," who hasn't aged since around the time he was first created in the original "Tron" in 1982.

Clu bears Bridges' face, altered to make him about 35 years old, but it's grafted onto a younger actor's body.

While it may be eerie for audiences to see a new performance from a younger-looking Bridges, it was no less strange for the actor himself.

"It's bizarre. It's great news for me, because now it means I can play myself at any age," Bridges said.

There have been digitally created faces before, even on fully animated bodies. Think Gollum in "The Lord of the Rings" or Dobby from "Harry Potter."

But no movie yet has done what The Walt Disney Co.'s "Tron: Legacy" attempts - putting an actor's rejuvenated face on a younger body, and in 3-D no less. Inevitably, the 61-year-old-turned-35-year-old face will be compared to Bridges when he was actually 35.

"With Jeff, we can go rent 'Against All Odds' or 'The Fabulous Baker Boys' or 'Starman,"' visual effects supervisor Eric Barba said. "All this makes it incredibly difficult."

The filmmakers did not want Bridges' Clu looking precisely as he did in 1982. The idea was that some time had elapsed, and Clu was meant to look like Bridges in "Against All Odds," which came out two years after the original "Tron."

"In our mythology, Clu was created after the events of the first film," director Joseph Kosinski said. "This is Clu 2."

Computers have already been used to roll back the years. Patrick Stewart and Ian McKellen were made a couple decades younger in scenes from "X-Men: The Last Stand" from 2006.

Head alterations have happened, too. Helena Bonham Carter had an oversized cranium as the Red Queen in this year's "Alice in Wonderland," and the late Oliver Reed's face was put on a body double after he died during the shooting of "Gladiator," released in 2000.

But the triple-toe-loop of complexity in "Tron: Legacy" is a notch tougher than all that.

It also goes beyond the techniques that Barba and "Tron" animation supervisor Steve Preeg pioneered on Brad Pitt in the 2008 movie "The Curious Case of Benjamin Button," for which they shared an Oscar for visual effects. Pitt was digitally remade to look older, but he was never re-engineered to appear as the younger actor who has been seen by countless millions on celluloid.

By contrast, "we know what Jeff looks like and how he acted," Barba said. "It just means that people's perceptions will vary across the board."

In "Tron: Legacy," Clu was created to help Bridges' character and the other program, Tron, build a perfect virtual world, but Clu turns evil with his own dark notions of building a virtual society.

To make Clu, filmmakers made a silicon mold of Bridges' face and painted it like real flesh. They took multiple photos, put them into a computer and gave him a "digital face lift" that took out wrinkles, tightened the skin and shrunk down his nose and ears.

He then performed a series of facial movements, such as raising his outer left eyebrow or lifting his cheek. Those were recorded by camera and computerized in 3-D.

Finally, when Bridges acted in scenes as Clu, he wore a helmet with four tiny cameras pointed at his face. Dozens of dots on his face acted as reference points for the computer.

"Sometimes I could be in my street clothes and just have this weird helmet on," Bridges said.

The captured expressions are replicated on his younger-looking self. Actor John Reardon mimicked Bridges in later takes and had his face swapped out later.

Making sure Bridges' computerized head matched up with Reardon's body took artistry as well as high-tech. Preeg said filmmakers took more time looking at 160 Clu shots than they did at all the other 1,400 shots in the movie.

And who knows? Their hard work could help other aging actors reprise roles they never had in the first place.

"I think this technology opens up really interesting opportunities for actors," Kosinski said.