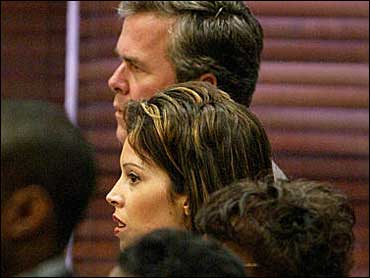 Gov. Jeb Bush's daughter completed a drug rehabilitation program Friday and a judge allowed her to go home with her parents.

Noelle Bush hugged Circuit Judge Reginald Whitehead during a drug court hearing as the governor and his wife Columba smiled. The president's niece had been ordered into treatment after she was arrested in January 2002 for allegedly trying to use a fraudulent prescription to buy the anti-anxiety drug Xanax.

"It's been quite a challenge, and I'm grateful," Noelle Bush said during the hearing at the Orange County Courthouse.

The governor refused comment, but his press office released a statement on his behalf.

"Columba and I are pleased that our daughter Noelle has completed this step, and grateful for the treatment she's received," the statement read. "She has worked hard to get here. We are proud of her efforts and love her very much."

Whitehead twice sent Noelle Bush to jail for breaking the rules in rehab. She was jailed for three days in July 2002 after being caught with prescription pills and served 10 days in October after being accused of having a small rock of crack cocaine in her shoe.