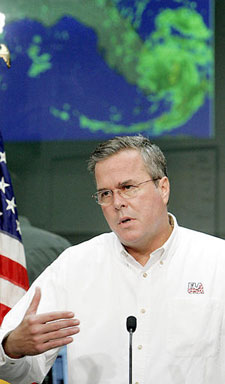 (AP)
Former Florida Governor Jeb Bush announced that he won't run for Senate in 2010. President Bush's younger brother had been a rumored candidate for the seat to replace Republican Mel Martinez, who is retiring after one term in the Senate.

"While the opportunity to serve my state and country during these turbulent and dynamic times is compelling, now is not the right time to return to elected office," Bush said in a statement.

Bush was governor of Florida from 1999-2007 and remains popular in the state. He struck a bipartisan note in his announcement that he would not run for Martinez's seat.

"President-elect Obama ran a tremendous campaign and I am proud to call him my President," Bush said. "I am confident Republicans will find productive ways to work together with the new administration to advance reforms both sides of the aisle can support."

Bush also called for further education reform and thanked Martinez "for his extraordinary service to our great state."