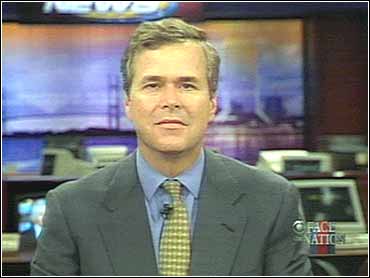 Florida Gov. Jeb Bush, facing published reports about infidelity as he ponders re-election, dismissed rumors on Monday of an extramarital affair with an agency head as an "outright lie."

"I cannot tell you how hurtful this is," Bush said in response to a reporter's question following a bill-signing ceremony. "I love my wife. There is nothing to this rumor. It is an outright lie."

Bush, the younger brother of President George W. Bush, also said Monday he plans to announce next month whether he will seek re-election in 2002. He said he would make the decision after sitting down with his family and talking about the toll the job takes on his private life.

For months, talk in Tallahassee bars and state offices and Internet Web pages linked Bush with Cynthia Henderson, secretary of the Department of Management Services. Monday's comment was his first public response to the rumors.

On Thursday, a columnist for the Tallahassee Democrat reported about a rumor of an affair involving two high-ranking but unidentified public officials. Over the weekend, two other papers — the St. Petersburg Times and the Orlando Sentinel — wrote about the rumors involving Bush and Henderson and said Bush had denied them.

"Lies were spread by gossip. Sadly, it's reached the point where it's being written about," Bush said. "But the fact you have to ask that question and I have to answer is sick, it really is."

Henderson, who was among a group of agency heads at Monday's bill signing, left without answering questions.

Bush, 48, has been married to Columba Bush for 27 years. They have three children.

Bush originally appointed Henderson to head the Department of Business and Professional Regulation in January 1999. During her first year on the job, she faced questions about her ethics in running the agency on several occasions.

Bush at that time said the criticism of Henderson was unjustified and had nothing to do with his decision.