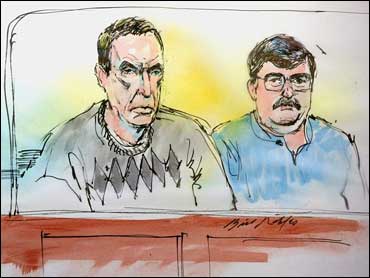 A Jewish Defense League activist imprisoned for his role in a plot to bomb a California mosque and the office of a Lebanese-American U.S. congressman was killed at a federal prison in Phoenix, an FBI spokesman said Saturday.

Krugel's wife, Lola, said FBI investigators told her an inmate had struck her husband on the head from behind with a cement block.

"Earl never saw it happening," she said. "He was exercising."

He had been at the medium-security prison for three days, according to his sister Linda Krugel, also of Los Angeles.

Earl Krugel, a former dental assistant from Los Angeles, and late JDL leader Irv Rubin were arrested in 2001 and charged with conspiring to bomb the King Fahd Mosque in Culver City and a field office of Republican Rep. Darrell E. Issa, who is Lebanese-American.

Despite the plea, he was sentenced in September to 20 years in prison. The reasons for the collapse of an initial plea agreement were sealed, despite a lawsuit by news organizations, including The Associated Press, to make the details public.

During the case, Krugel's lawyers said prosecutors were angered that his client withheld for several months the names of four people allegedly connected to the 1985 murder case of Alex Odeh, a regional director of the American Arab Anti-Discrimination Committee. Several former JDL members were suspected in the case, but no one was ever charged.

"Earl did not deserve what he got," Krugel's wife said Saturday. "It was all political. It was all about Alex Odeh and my husband did not know anything about Alex Odeh. I'm devastated and I'm shocked that the system allowed this to happen."

She said she last spoke with her husband Thursday and he was still adjusting to prison life.

"He was supposed to call me on Friday morning," she said. "When I didn't hear from him, I felt something was not right."

The Jewish Defense League was founded in 1968 by Rabbi Meir Kahane. Kahane advocated the forcible removal of Arabs from Israel. He was assassinated in 1990 in New York.

JDL spokesman Brett Stone said he was stunned by Krugel's death. He noted it came exactly three years after authorities say Rubin slashed his neck with a prison-issued razor blade and jumped 18 feet (5.4 meters) over a railing at a federal detention center in Los Angeles. Rubin died nine days later.

"I'm really sad," said Stone, who believes Rubin's death was not a suicide. "It's shocking that's the second member of the Jewish Defense League in three years who has died in federal prison."