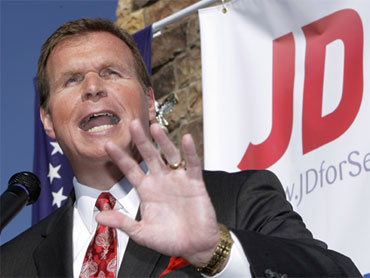 John McCain's Republican primary challenger said he regrets taping an infomercial on behalf of a company accused of taking advantage of consumers.

"I should not have made the ad. It was a mistake," J.D. Hayworth said in a statement released late Thursday.

The former congressman and talk-radio host said he didn't completely check out National Grants Conferences before agreeing to serve as its pitchman.

In the infomercial, Hayworth urges viewers to attend a free seminar to learn how to get free government money. Critics say the company used high-pressure sales tactics to persuade people to pay for information that is free online or at a library.

"I hope voters will look past a video presentation made three years ago and instead look at the issues confronting us in 2010," Hayworth said.

The ad was taped in 2007 but didn't come to light until Monday. Political commentators have roundly mocked Hayworth for it. McCain's campaign is airing a television ad showing clips of Hayworth's performance and calling him a "huckster."

"Now, after four days of withering criticism, Congressman Hayworth has made a political calculation and claims he's suddenly sorry," McCain spokesman Brian Rogers said in a statement Thursday. "But it's too little, too late, especially for the people who this company ripped off with Congressman Hayworth's help."