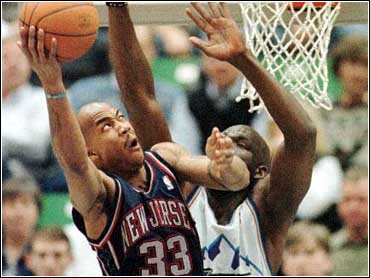 If Karl Malone could share his good health with Jeff Hornacek, maybe Hornacek would stick around for another season.

Hornacek scored 27 points, shooting 10-of-11 from the field. He played 37 minutes after almost deciding to go home before tipoff as he battled the flu.

"A truck hit me last night in my sleep," he joked.

Bryon Russell added 14 as the Jazz won for the sixth time in seven games. Afterward, Malone took off his jersey and tossed it into the crowd because of an agreement his wife, Kay, made with Hornacek.

"My wife and Jeff had a bet that any time I scored 35 points or more in a game, that you have to throw your jersey into the crowd," Malone said. "So I turned and pointed it to her and threw the jersey."

Stephon Marbury, going against John Stockton in a matchup of two of the NBA's best point guards, led the Nets with 34 points while Kerry Kittles scored 22 and Keith Van Horn had 18.

Hornacek sealed the victory on a pair of free throws with 11 seconds left after the Nets had cut their deficit to 103-101 on a 3-pointer by Marbury with 16.8 seconds remaining.

"I didn't expect to make the shots like I was doing," Hornacek said. "I think I was probably less focused. The big fella upstairs had to be guiding those balls in there becase I felt like I was kind of swaying side to side."

Hornacek has said he plans to retire after this year, and Malone doesn't think he can change Hornacek's mind.

"I would do anything if Jeff would play another year but I know he won't," said Malone, who has missed three games to injuries in his 15-year career. "He's going out there every night and sucking it up."

The loss spoiled the return to Salt Lake City of Van Horn, the former University of Utah standout who sat out his rookie game at the Delta Center with an injured ankle. Last season's game was lost to the lockout.

After receiving a 20-second standing ovation during introductions and scoring six of New Jersey's first eight points, things went downhill for Van Horn. He struggled to a 5-of-16 effort and fouled out with 1.7 seconds left.

"It was a great reception. I couldn't have asked for more," Van Horn said. "I have great respect for this community. I always will. I may have tried to get myself too calmed down."

This month, the Jazz also went down to the wire at home against Eastern Conference middleweights Orlando, Boston, Detroit, Milwaukee and Atlanta. The Celtics and Bucks escaped the Delta Center with victories.

After Van Horn's free throw with 5:28 remaining gave the Nets an 88-87 lead, the Jazz responded. Russell made a three-point play, Malone got a basket and Hornacek hit a 3-pointer to make it 95-88 with 3:40 to play.

After a New Jersey timeout, Jim McIlvaine made one of two free throws. But Armen Gilliam took a feed from Stockton and made a running hook shot in the lane and Hornacek hit a jumper just inside the 3-point arc.