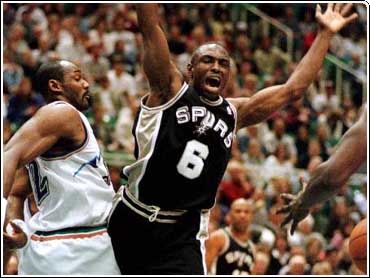 "It was just nice to get over the top," Stockton said. "It's only one win, but it sure feels a lot better walking around the house."

With the Jazz down two points, Stockton made a 3-pointer with two minutes remaining to put Utah ahead 89-88. After Terry Porter powered in for a layup, Stockton's driving layup with 16 seconds remaining gave Utah a 91-90 lead.

On the next possession, Duncan was closely guarded by Karl Malone and clanged a jumper off the back rim from 20 feet away. A loose ball foul on Jaren Jackson gave Bryon Russell a pair of free throws which put Utah ahead 93-90.

Duncan, again closely guarded by Malone, airballed a 3-pointer at the buzzer.

"We knew he was going to take the last shot," Malone said. "We just wanted to make sure it was a tough shot."

Duncan led the Spurs with 32 points, 24 coming in the first half. He managed just two points in the final period.

"He missed some shots," said Malone, who led Utah with 25 points. "Guys played him tougher. We were not going to let him get into a rhythm in the second half. I put a body on him, I made him step out."

Duncan has totaled 172 points in his lasfive games against Utah. The last time San Antonio faced the Jazz, he set a career high with 46 points on Jan. 10.

"He got most of his points in the first three quarters," said Armen Gilliam, who hit three jumpers in the final quarter to help the Jazz win.

The losing skid was Utah's worst since a nine-game slide in 1983, but the Jazz were confident they'd bounce back.

"I didn't take it home," Stockton said. "I didn't kick the dog and I didn't beat my kids."

"At least we stopped the bleeding a little bit," Jazz coach Jerry Sloan said. "I thought our guys played a little bit harder today than what we have been. It looked like we had a little bit more energy to try to compete."

The Jazz also rebounded from Friday's humiliating 113-67 loss to the Los Angeles Lakers, their most lopsided defeat since losing 130-84 to the Lakers in March of 1986.