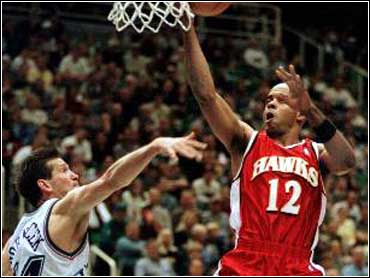 In an atypical home game in which the Utah Jazz never held more than a two-point lead, John Stockton, typically, made a great pass.

Stockton found Armen Gilliam wide open under the basket for the winning score with 2.2 seconds to play Monday night to give the Jazz a 96-94 come-from behind victory over the Atlanta Hawks.

"We ran an old-fashioned play, looking for whatever came up, and everybody left Armen underneath," said Stockton, whose 10th assist gave the Jazz their third straight win.

Stockton also scored 10 points as the Jazz handed the Hawks a heartbreakong loss in a game Atlanta led most of the way.

"I was really glad to see it. It's rare that we get someone so wide open on that play," Stockton said.

Said Gilliam: "Karl (Malone) said he was going high, so I was going to the basket. John made a heck of a pass."

Utah got the ball with 18.2 seconds left and the score tied after an offensive foul call on Bimbo Coles. Stockton dribbled the ball high, came off Malone's screen on the right side and found a wide-open Gilliam, who had just been inserted into the game.

Atlanta lobbed the ball to Dikembe Mutombo on the ensuing play, but Utah had a foul to give and Olden Polynice committed it before Mutombo could shoot. With one second left, Jim Jackson missed a 3-point attempt.

Hawks' Coach Lenny Wilkens questioned the quickness of the call on Mutombo, which trimmed their last chance from 2.2 seconds to one second.

"Dikembe never got a chance to get out of the lane, said Wilkens, whose team dropped its fifth game in its last eight. "It was so quick, they called it so quick."

Rider disputed the push-off foul on Coles which gave the Jazz the ball with 18.2 seconds left and the score tied.

"That foul was ludicrous," said Rider, who scored 22 points, including five in the final five minutes. "You don't call a foul like that and decide the game with 20 seconds left."

Malone led all scorers with 25 points, including eight in the fourth quarter. Jeff Hornacek added 17, including 13 in the third quarter when the Jazz trimmed Atlanta's four-point lead to one.

Rider led the Hawks with 22 points, including five in the final five minutes to give Atlanta a lead of as much as 94-88 with 2 minutes left. Jackson added 15 points, and Mutombo put in 12 points and grabbed 16 rebounds.

Malone scored six of the Jazz's next eight points before Gilliam's game-winner.

"We have to be happy with the result," said Malone, who also grabbed nine rebounds and scored his six late points after picking up his fifth foul. "We didn't lose our composure down the stretch, and we had some good defensive stops."

The Hawks held an 89-81 advantage after a hook shot by Mutombo with 6:41 to play. That capped an 11-4 run for the Hawks, led by Jackson with five points and Alan Henderson with four.