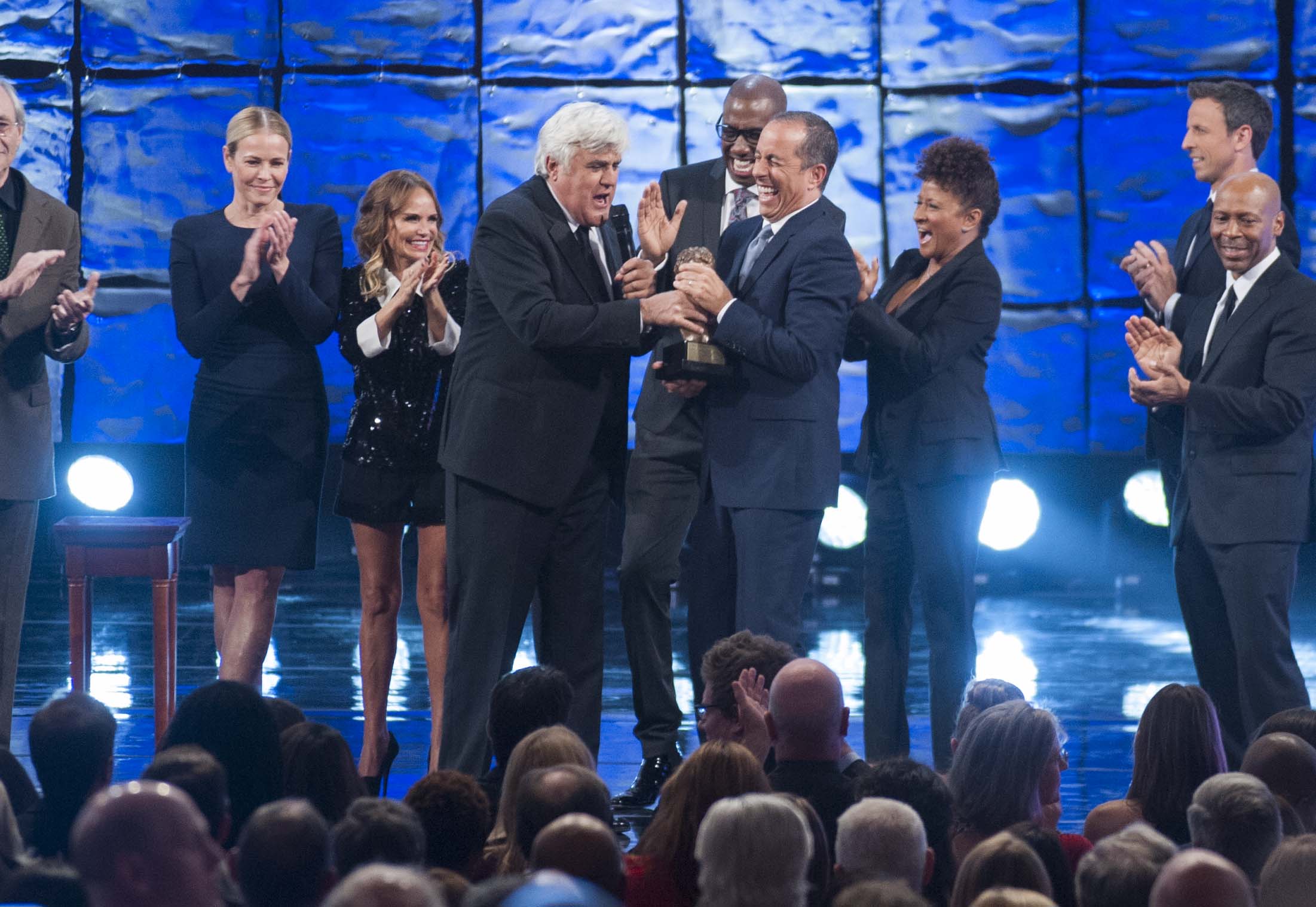 WASHINGTON - The joke was on Jay Leno as comedians saluted the former "Tonight Show" host Sunday when he received the nation's top humor prize.

The show will be broadcast nationally Nov. 23 on PBS.

Fallon, who replaced Leno this year on "The Tonight Show" after Leno stepped down for the second time, said it was a good time to honor Leno, "a man who has done so much for NBC, so much that we had to celebrate his career on PBS."

On the red carpet before the show, Leno, 64, said "The Tonight Show" years were the best of his life. He said Fallon is bringing "a new dynamic" to the show, and "it's fun to see it change."

"The truth is, my time was done," Leno said later in accepting the prize. "When I left 'The Tonight Show,' I didn't leave dead broke like Bill and Hillary. I was able to save."

The award honors people who have had an impact on American society in the tradition of Samuel Clemens, the writer, satirist and social commentator better known as Mark Twain. Past honorees include Carol Burnett, Ellen DeGeneres, Will Ferrell and Bill Cosby.

Leno said he had no idea this award was coming and that other honors are phony because people campaign for them.

Leno built his career in standup comedy and still makes more than 100 live performances each year. He inherited the "Tonight Show" from Johnny Carson in 1992, beating out David Letterman, and was the top-rated late-night host for years.

Handler and Sykes, two leading female comedians, thanked Leno for giving them wider exposure on late night TV. But some ribbing also was in store.

Handler said Leno visited the Smithsonian over the weekend and tried to donate a zip drive of all his jokes, but the museum wouldn't take them.

"When I first heard that Jay was getting this Mark Twain Prize tonight, which is a huge honor, I found out it was for humor, and I was a little bit confused," she said. "I wasn't sure what the connection was."

Sykes said she nearly didn't make it to Washington.

"On the plane, I sneezed twice, and everybody gave me the stink eye," she said. "This Ebola stuff is getting a little out of hand. It's a little scary. I'm going back to just black. I'm not African anything."

Seinfeld said he's been friends with Leno for 38 years and that the longtime NBC funnyman was his idol.

"There's no one more deserving to get this wonderful award obviously than Jay," Seinfeld said. "No one - except and I really don't want to sound bitter here - except maybe me? I mean come on."

"I love Jay," he said. "I love Jay because success didn't give him a swell head. Nature did that."

Leno didn't leave TV for long. Last week, NBC announced that he's developing a new show from his Los Angeles garage about his other great passion: cars. "Jay Leno's Garage" will premiere on CNBC in 2015.