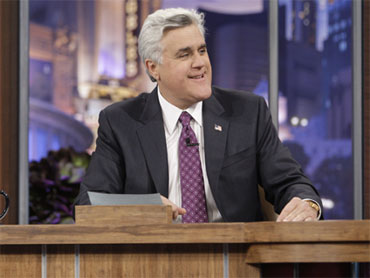 Jay Leno started Monday's show by spoofing the end of "The Wizard of Oz," where Dorothy awakens to find all those crazy goings-on were only a dream.

Jay, seen in sepia tones in what was meant to be a Kansas farmhouse, said, "I went away to the strangest place. It was wonderful, but some of it wasn't so nice."

In fact, Leno had gone away from the nation's TV screens for less than a month when he returned Monday night to his old haunts in late night.

"It's good to be home," he told his audience as he began his first "Tonight Show" monologue since last spring. "I'm Jay Leno, your host. At least, for a while."

Leno was reclaiming his old job at NBC's "Tonight Show" just nine months after giving it up to Conan O'Brien, and only 19 days after NBC pulled the plug on Leno's own prime-time misadventure.

"We were off for the last couple of weeks," Leno cracked during his monologue. "Kind of like the Russians at the Olympics. What happened to them?"

Leno noted that one of his guests was an American gold medalist, skier Lindsey Vonn.

"Did you see her?" Leno marveled. "When it comes to going downhill, nobody is faster. OK, except NBC."

As he zinged his own network, along with former vice president Dick Cheney, Toyota and Tiger Woods, Leno signaled the resumption of the late-night war between him and his longtime CBS foe David Letterman, who had gained the ratings upper hand during O'Brien's brief, unhappy stay as "Tonight Show" host.

And in a pre-taped piece, Leno knocked on front doors asking unwitting residents if he could come in and try out their desks (he had notably eschewed any desk for "The Jay Leno Show"). Then, back in the studio, he unveiled his own stylish new desk.

NBC is praying that he will comfortably settle back behind it on the "Tonight Show," where he ruled late night (and beat Letterman) for much of 17 years.

But already handicappers were weighing whether Leno can recapture his momentum after leaving last May in favor of O'Brien, then stumbling badly in his weeknight prime-time hour.

Dorothy Elayan, 50, of Louisville, Ky., and her daughter, Jena, 19, who were visiting Southern California, were waiting to enter the NBC studio in Burbank for Monday's taping. Both said they preferred Leno over O'Brien.

"I didn't like Conan. I didn't like his sense of humor," Jena Elayan said. "I watched `The Tonight Show' when it was Jay Leno."

Her mother said she had remained a fan of Leno in prime time.

"I would like him earlier because I go to bed earlier. I was that one little person still watching," she said, referring to his disappointing prime-time ratings.

Also in line was Natalie Hanks, 19, of San Clemente, Calif., who said she found O'Brien funnier than Leno but added, "I wish there was room for both."

She said Leno might face resistance from O'Brien's fans.

"I've seen a lot of people on Facebook rallying around Conan. I think younger people" will boycott "Tonight" with Leno, Hanks said.

Meanwhile, theories have abounded concerning the next step for O'Brien, widely seen as victimized by Leno and by NBC's ham-handed shake up that led to his departure. The most popular scenario places him on the Fox network, butting heads nightly with Letterman and Leno.

With NBC's much-watched blanket coverage of the Winter Olympics now just a memory, the battered, often-ridiculed network desperately needs something new to brag about. Now a successful trip back to the future with Leno hosting "Tonight" might qualify - and could actually happen.