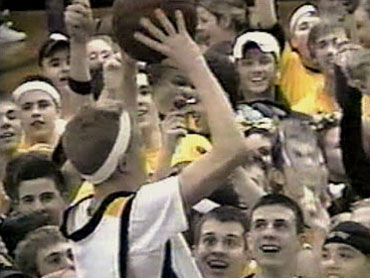 Before the movie deal, before the book deal, before Oprah - before he was famous - Jason "J-Mac" McElwain was a high school kid sitting across from me at an Applebee's.

But I'm getting ahead of myself.

Four years ago, I was asked to work with Steve Hartman on a series for the CBS Evening News, "Assignment America."

The idea was to let our audience decide which story we did. We presented three possible story choices at the end of the show every Friday. Votes were cast on the Internet over the weekend. People also emailed in story suggestions for us. Monday morning we had a winner. That winning story would air on the next Friday, where we also presented three new story choices.

Wednesday 2/22/06
We'd get a couple hundred story suggestions emailed every weekend. Some were good, some not so good. You get the idea. 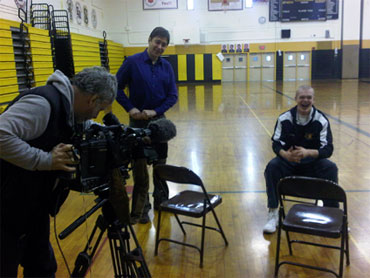 (CBS)
One email, was an absolute winner: "Autistic kid scores 20 points in the closing minutes of a high school basketball game in Rochester, NY."

I called our local affiliate WROC, and spoke to their sports director John Kucko. He fed in the now famous footage of Jason "J-Mac" McElwain coming off the bench and raining three pointers. Tape in hand, I ran down to my bosses, saying that they had to see this.

"Don't wait to put this up for a vote," they said. "Get up there now, and let's get it on the air for tomorrow."

Six hours later I was in an Applebee's in Rochester sitting across from David McElwain, his son Jason, and Jason's coach Jim Johnson. There were lots of big smiles and laughter at the table that night as they told me their story. We finished up, and agreed to meet at school the following morning.

I didn't sleep much that night. Then again, I don't sleep much when I'm on remote to begin with. But there was something about this kid and this story that I couldn't get out of my head.

Behind the Scenes with J-Mac

Thursday 2/23/06
The next day at school, myself, Hartman and our cameraman Bob Caccamise followed Jason around school. We didn't have a lot of time to get the story on the air that night. Like most other kids in the school, we just wanted the school day to be over. After interviewing Jason, his father and his coach we were ready to cut the piece and get it on TV.

It was late in the day, and we were "crashing" the piece. We had a satellite truck in the parking lot of some hotel. Bob and Steve were inside the truck, cutting the video "tape to tape." I was pacing outside the truck on my cell-phone, reassuring my bosses that we were ok, and that we were going to make it on TV.

"I think it's pretty good," I said to my boss as we fed our story in.

Our story ended with people in the stands charging the floor and carrying Jason on their shoulders after he hit the last three pointer.

To this day, that video still gets to me. It was an amazing moment. Just think about the humanity on display there. Coach Johnson puts Jason in his first, last, and only game of his high school career. Jason makes the best of the opportunity, and it ends up like something out of a movie - think "Rudy" but basketball.

Next time you see the video, just watch and listen to the crowd. It's unreal.

After the story aired, our blackberries and cell phones lit up with ecstatic messages. The reaction to the story was huge. I didn't know how huge, until the next day.

Friday 2/24/06
Back in NYC, Hartman and I were "crashing" again. The story that had the most votes from the previous week - about America's oldest CEO- was due to air.

I was still a little giddy about the J-Mac story. One of my colleagues told me that the story was all over Facebook. I replied, "Cool. What's Facebook?"

Another one of my colleagues was listening to local sports talk radio and said, "Mike and the Mad Dog are talking about your story last night. They want you to re-run it tonight."

I never thought that would happen. I was wrong. The great Ed Bradley was anchoring the Evening News that night. I remember he chuckled and smiled when Hartman and I walked past him.

"We're running this again," he asked.
"Apparently so," I said.

For the first time, we re-ran a story on the Evening News. It aired again on CBS Sports that weekend.

J-Mac's story took on a life of its own. The rest, they say, is history. Oprah would come calling, an ESPY award, a book deal, a movie's in the works.

I'll always remember that meal with Jason, his father, and his coach at Applebee's. Their lives were just on the cusp of changing forever, and we just didn't know it yet.

We would end up doing two more stories on Jason. We went back to have a closer look at Jason's high school for the second piece. As Steve said in that story - Jason made the shots, but his friends made the moment. We did a third piece when Jason met President George W. Bush.

So what's Jason up to now? Our old pal Steve Hartman caught up with him recently. That story will be on tonight's CBS Evening News. Hope to see you then.