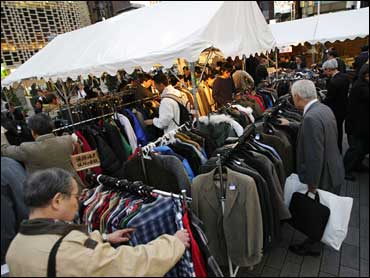 Japan's economy slid into a recession for the first time since 2001, the government said Monday, as companies sharply cut back on spending in the third quarter amid the unfolding global financial crisis.

Government officials and economists warned that the world's second-largest economy could contract further in coming months.

Japan's economy shrank at an annual pace of 0.4 percent in the July-September period after a declining an annualized 3.7 percent in the second quarter. That means Japan, along with the 15-nation euro-zone, is now technically in a recession, defined as two straight quarters of contraction.

"What we're starting to see is the extent of deterioration in external demand start to weigh more heavily on the Japanese economy," said Glen Maguire, chief Asia economist at Societe Generale. "And I think looking forward, there's every indication that dynamic is going to continue."

The result was worse than expected. Economists surveyed by Kyodo News agency had predicted gross domestic product would gain an annualized 0.1 percent.

Japan's Economy Minister Kaoru Yosano said following the data's release that "the economy is in a recessionary phase."

Asian markets were mixed Monday as Japan's confirmation emphasized the gloomy outlook for the world economy.

A weekend meeting of world leaders in Washington to discuss reform of the stricken global financial system provided a symbolic show of unity between rich and emerging nations but produced few concrete measures.

"Trading volumes are very low. We don't have the big selling that we had before but then there is no significant buying either," he said.

Investors seemed to react little to this past weekend's summit where leaders vowed to cooperate more closely and give bigger roles to fast-rising nations, but postponed many decisions until their next gathering in April.

The Dow Jones industrial average tumbled 3.8 percent Friday after another session of volatile trading. U.S. stock index futures were up slightly. Dow futures were up 31 points, or 0.4 percent, to 8,402, and S&P futures also were up 0.4 percent to 864.50.

For Japan, the worst may be yet to come, especially with dramatic declines in demand from consumers overseas for Japan's autos and electronics gadgets. Hurt also by a strengthening yen, a growing number of exporters big and small are slashing their profit, sales and spending projections for the full fiscal year through March.

"As the global economy is expected to slow down for the time being, downward movements (in Japan) are expected to continue," Yosano said.

At its last meeting, the Bank of Japan cut its key interest rate for the first time in more than seven years, lowering it to 0.3 percent, joining central banks around the world in trimming borrowing costs.

In its semiannual outlook report, the central bank slashed its projection for economic growth to just 0.1 percent for the year through March, compared with a 1.2 percent gain it projected in July. It said both exports and domestic private demand have weakened.

The deteriorating conditions also recently led Masamichi Adachi, senior economist at JPMorgan Securities in Tokyo, to downgrade his outlook on the Japanese economy.

"We are now looking for a severe recession, similar to that during Japan's own financial market crisis in 1997 to 1998, and to the current U.S. recession, in terms of depth of real GDP contraction," he said in a report.

Private consumption, which accounts for more than half of inflation-adjusted GDP, increased 0.3 percent from the previous quarter. However, the rebound in consumer demand is unlikely to last, economists say.