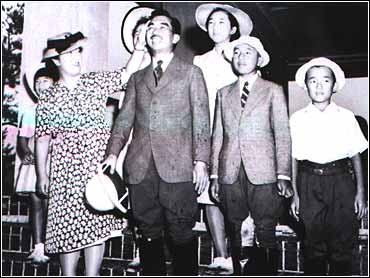 Japan's Dowager Empress Nagako, the widow of Emperor Hirohito, is dead at the age of 97. She died Friday after suffering breathing problems for two days.

The announcement of her death Friday afternoon was made in a nationally broadcast news conference by Imperial Household Agency head Sadame Kamakura.

"I feel an extreme sorrow," said Kamakura. "I feel overwhelmed by the many memories of the late emperor and the empress dowager."

Well-wishers flocked to the palace in central Tokyo to pray for her, even though she was a remote figure who was rarely seen in public after the death of her husband in 1989.

"The death of Emperor Hirohito was the beginning of the end of an era, and this truly marks the end," an office worker told one television news program.

Japanese television played footage of the Dowager Empress' life, showing images from her youth, the dark days of World War Two and her travels with her husband around the world after he gave up his divinity following Japan's World War II defeat.

The cabinet called for flags to fly at half-mast and said public events should not include singing, dancing or music for a day.

Nagako fell into a coma Friday morning after her blood pressure dropped. She had been having trouble breathing since early Thursday and was using an oxygen mask.

Nagako was confined to a wheelchair in 1980 after injuring her spine at least twice, including a fall in July 1977.

Unlike Britain's popular Queen Mother, the Empress had been out of the public's eye for years due to ill health. She had an image as a talented artist and devoted wife during her nearly 65 years of marriage.

Born on March 6, 1903 as the first daughter of then Prince Kunihiko Kuni, a descendant of a 13th century emperor, Nagako was chosen at the tender age of 14 to become Hirohito's consort.

Within a month, Nagako left the Joshi Gakushuin school and began to study under tutors for her role as future empress.

Despite her impeccable lineage, hot debate raged over her eligibility to become the wife of a crown prince who, upon ascension to the throne, would be revered as a "living god."

The destructive Tokyo earthquake of 1923 delayed marriage plans, but on January 26, 1924, Nagako and Hirohito were wed. On December 25, 1926, Hirohito became emperor.

Under pressure to produce a royal son to inherit the Chrysanthemum Throne, Nagako first gave birth to four daughters, including one who died in infancy.

Courtiers pressured Emperor Hirohito to take a concubine, since only a male can succeed to the throne.

On December 23, 1933, Nagako fnally gave birth to a son, Crown Prince Akihito, the event she was later to call "the happiest moment in my life."

Nagako had two more children, including a second son.

Nagako's image as devoted wife, talented poet and musician and the warm-hearted grandmother of her later years, however, stands in contrast to rumors painting a picture of harsh treatment of her commoner daughter-in-law Michiko.

The marriage of Michiko Shoda, the eldest daughter of a wealthy flour company executive, to then-crown prince Akihito was an unprecedented break with tradition.

While the public saw it as a welcome move that brought the Imperial family closer, talk swirled that for Nagako and many royal courtiers, it was an unwelcome blow.

Japan's royal watchers claim the crown princess, a spirited woman seen as the epitome of feminine charm, has grown gaunt and somber under the domination of the imperial family.

"I believe such talk is true," one royal watcher said. "But similar things happen in royal families around the world when outsiders marry in."

The current Crown Princess Masako, a once-vibrant and outspoken career diplomat, has herself been transformed into a demure, soft-spoken shadow of her former self after seven years of cloistered life behind the Chrysanthemum curtain.

Like Nagako, Masako is under pressure to produce an heir.

Hopes that Masako and Crown Prince Naruhito would greet their seventh anniversary on June 9 as expectant parents were dashed when the 36-year-old Masako suffered a miscarriage in late December.

Nagako is survived by Emperor Akihito, three other children and 10 grandchildren, including Crown Prince Naruhito.

A Shinto-style funeral will be held in about six weeks because it takes at least a month to prepare the elaborate tomb at the imperial family mausoleum on the outskirts of Tokyo.