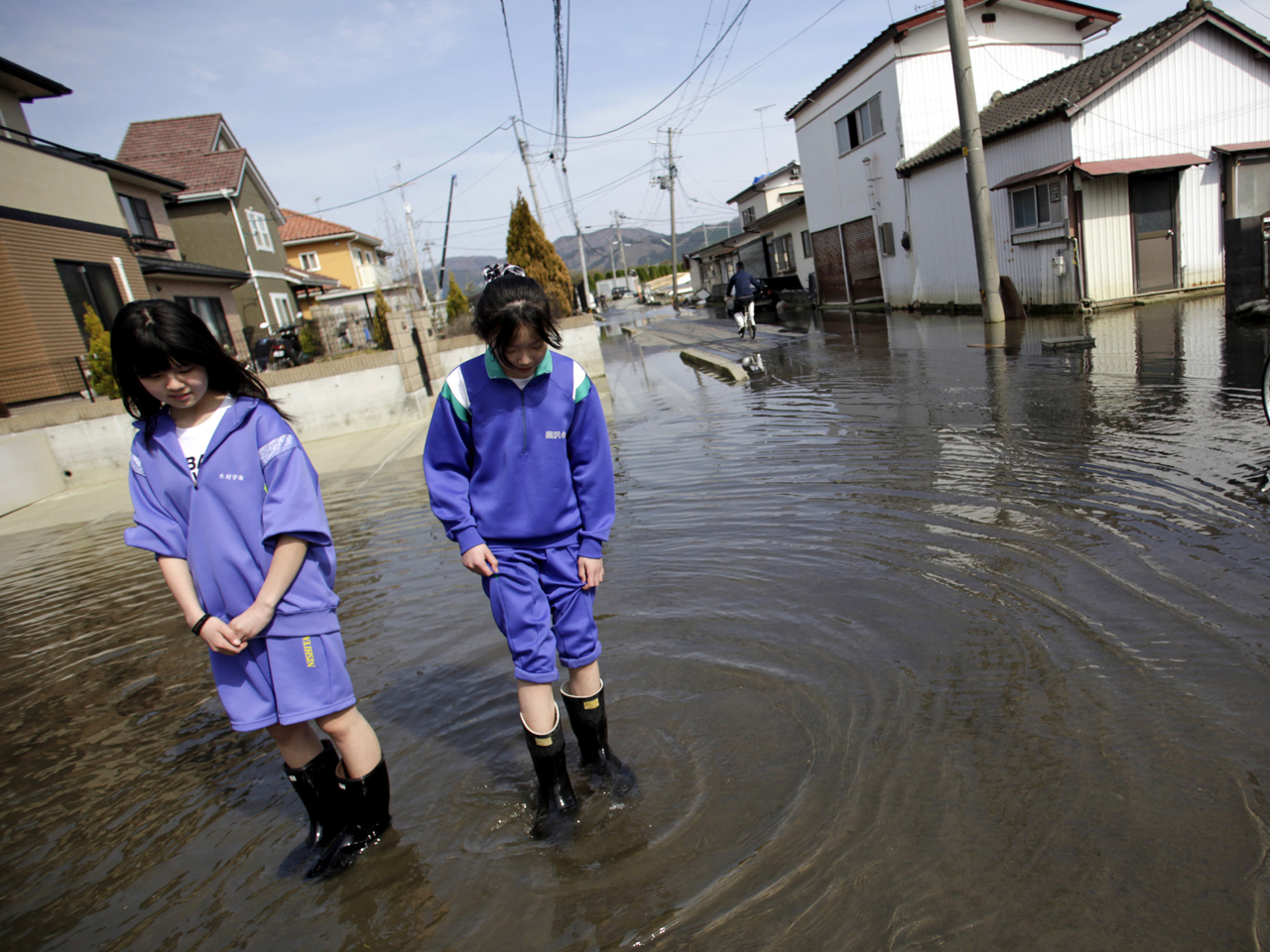 ISHINOMAKI, Japan - When water begins to trickle down the streets of her coastal neighborhood, Yoshiko Takahashi knows it is time to hurry home.

Twice a day, the flow steadily increases until it is knee-deep, carrying fish and debris by her front door and trapping people in their homes. Those still on the streets slosh through the sea water in rubber boots or on bicycle.

"I look out the window, and it's like our houses are in the middle of the ocean," says Takahashi, who moved in three years ago.

The March 11 earthquake that hit eastern Japan was so powerful it pulled the entire country out and down into the sea. The mostly devastated coastal communities now face regular flooding, because of their lower elevation and damage to sea walls from the massive tsunamis triggered by the quake.

In port cities such as Onagawa and Kesennuma, the tide flows in and out among crumpled homes and warehouses along now uninhabited streets.

A cluster of neighborhoods in Ishinomaki city is rare in that it escaped tsunami damage through fortuitous geography. So, many residents still live in their homes, and they now face a daily trial: The area floods at high tide, and the normally sleepy streets turn frantic as residents rush home before the water rises too high.

"I just try to get all my shopping and chores done by 3 p.m.," says Takuya Kondo, 32, who lives with his family in his childhood home.

Most houses sit above the water's reach, but travel by car becomes impossible and the sewage system swamps, rendering toilets unusable.

The rising edge of plate caused the sea floor off Japan's eastern coast to bulge up — one measuring station run by Tohoku University reported an underwater rise of 16 feet (5 meters) — creating the tsunami that devastated the coast. The portion of the plate under Japan was pulled lower as it slid toward the ocean, which caused a corresponding plunge in elevation under the country.

"We thought this slippage would happen gradually, bit by bit. We didn't expect it to happen all at once," says Testuro Imakiire, a researcher at Japan's Geospatial Information Authority, the government body in charge of mapping and surveys.

Imakiire says the quake was powerful enough to move the entire country, the first time this has been recorded since measurements began in the late 19th century. In Tokyo, 210 miles (340 kilometers) from Ishinomaki, parts of the city moved 9 inches (24 centimeters) seaward.

The drop lower was most pronounced around Ishinomaki, the area closest to the epicenter. The effects are apparent: Manholes, supported by underground piping, jut out of streets that fell around them. Telephone poles sank even farther, leaving wires at head height.

As surrounding areas clear rubble and make plans to rebuild, residents in this section of Ishinomaki are stuck in limbo — their homes are mostly undamaged and ineligible for major insurance claims or government compensation, but twice a day the tide swamps their streets.

"We can't really complain, because other people lost so much," says Yuichiro Mogi, 43, as his daughters examine a dead blowfish floating near his curb.

The earthquake and tsunami left more than 25,000 people either dead or missing, and many more lost their homes and possessions.

Mogi noticed that the daily floods were slowly carrying away the dirt foundation of his house, and built a small embankment of sandbags to keep the water at bay. The shipping company worker moved here 10 years ago, because he got a good deal on enough land to build a home with a spacious front lawn, where he lives with his four children and wife.

Most of the residences in the area are relatively new.

"Everyone here still has housing loans they have to pay, and you can't give away this land, let alone sell it," says Seietsu Sasaki, 57, who also has to pay off loans on two cars ruined in the flooding.

Sasaki, who moved in 12 years ago with his extended family, says he hopes the government can build flood walls to protect the neighborhood. He never paid much attention to the tides in the past, but now checks the newspaper for peak times each morning.

Officials have begun work on some embankments, but with much of the city devastated, resources are tight. Major construction projects to raise the roads were completed before the tsunami, but much of that work was negated when the ground below them sank.

The constant flooding means that construction crews can only work in short bursts, and electricity and running water were restored only about two weeks ago. The area still doesn't have gas for hot water, and residents go to evacuee shelters to bathe.

"We get a lot of requests to build up these areas, but we don't really have the budget right now," says Kiyoshi Koizumi, a manager in Ishinomaki's roads and infrastructure division.

Sasaki says he hopes they work something out soon: Japan's heavy summer rains begin in about a month, and the higher tides in autumn will rise well above the floor of his house.