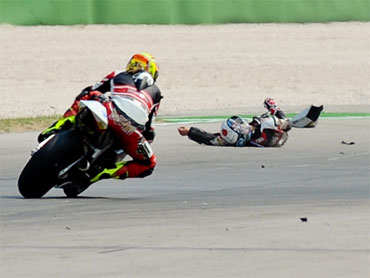 Japanese teenager Shoya Tomizawa died after crashing and being hit by two other riders during Sunday's Moto2 race at the San Marino Grand Prix, the second fatality to hit the sport in two weeks.

The 19-year-old Tomizawa lost control of his bike and hit his head on the track as his bike flipped over. While on the track, he was then hit at full speed by riders Alex De Angelis and Scott Redding.

A statement on the MotoGP website said Tomizawa died of cranial, thoracic and abdominal trauma.

Italian news agency ANSA reported that Tomizawa was in a coma when he was flown by helicopter to a hospital.

The races continued and the riders were only informed of Tomizawa's death at the end of their event.

"I saw the incident on the TV monitor and I could see that it was serious - but not that serious," said Italian rider Valentino Rossi, who finished third in the featured MotoGP race. "When these things happen, nothing else seems to matter."

Moto2 is the new name for the former 250cc category, one step below the 500cc division of MotoGP. Moto2 also generates tremendous speeds and officials said they decided not to cancel the race due to the fear of other accidents if a red flag was suddenly shown.

Tomizawa's death comes a week after 13-year-old Peter Lenz died during a warmup event at the United States Grand Prix in Indianapolis. He crashed and was hit by another rider in a race before the Indianapolis MotoGP on Aug. 29.

"Nothing has happened for two years and now we have two deaths in two weeks," Carlo Pernat, manager of Loris Capirossi and Marco Simoncelli said. "This time it is a boy of only 19 years of age."

Since Moto GP's foundation in 1949, there have been 46 recorded deaths.

Prior to 2010, Japan's Daijiro Kato was the last rider to die from an accident. He crashed during the first race of the 2003 season, at Suzuka in Japan, and died following two weeks in a coma.

The first ever death in MotoGP occurred at the Isle of Man Grand Prix in 1949. Reuben "Ben" Thomas died when he drove into a banking.

The next MotoGP race takes place in Spain on Sept. 19.